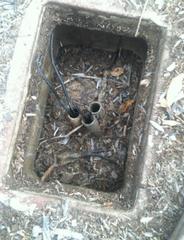 February 13, 2014 (San Diego's East County) - Investigators with the Santee Sheriff's Station want your help in identifying and locating those responsible in a series of electrical copper wiring thefts.

Between December 2013 and the end of January 2014, thieves have stolen about 4,000 feet of copper wiring from street lights and sidewalk lighting. Copper wiring has also been stolen from irrigation and water control systems in the Mission Creek and River Park areas of Santee.

In most of the thefts, the suspects broke the cement covers to gain access to the copper wiring. The City of Santee estimates the damage and replacement costs stemming from the copper thefts at more than $60,000.

You can also call the Crime Stoppers anonymous tip line at (888) 580-8477. A reward of up to $1,000 is being offered for information leading to an arrest. Anonymous email and text messages can be sent in via www.sdcrimestoppers.com.