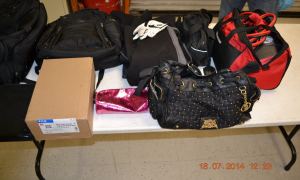 July 20, 2014 (Santee)--If you’ve been a victim of a car burglary at a local golf course, Santee Sheriff’s Station may have some good news for you.

Detectives have arrested two people in connection with a month-long series of vehicle burglaries—and recovered stolen property. While the owners of most stolen items have been notified, some items remain unclaimed.  You can view a  photo of the recovered items at EastCountyMagazine.org in our Crimebeat section or call the Santee Sheriff Station at 619-956-4000.

According to Sergeant Joel Stranger, witnesses reported seeing a red car at some of the crime scenes.  On July 17th, Santee detectives stopped  20-year-old Brianna Gross and Joshua Miller, age 33, in a red Honda near Santos Road.  Property stolen from three vehicle burglaries they had allegedly just committed were found in their vehicle and both were arrested.

Search warrants were issued at their homes, where more stolen property was recovered.  The two suspects now face charges of conspiracy, committing a felony while outo n bail, and at least 20 counts of vehicle burglary, with more cases under investigation.