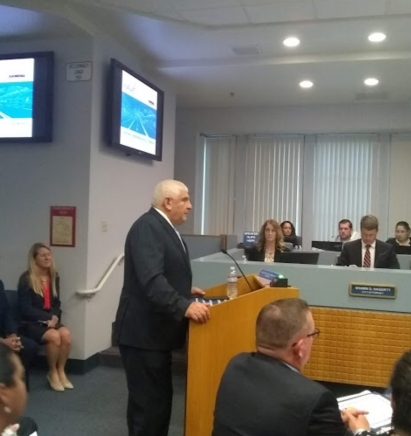 The Council appeared united in telling a team of three professionals from the San Diego Association of Governments (SANDAG), the regional transportation planning agency, to keep its hands off any committed funding to expand the key highways to the city.

"Everybody here is excited to hear about bold, new ideas," said Councilwoman Laura Koval. "But we also want you to know that we're still moving forward with our plan...and we're still going after funds to complete our highways."

In a 10-minute presentation made to the Council June 25, the SANDAG group gave an overview of what this region could do to improve what is admittedly one of the worst places in the nation for traffic congestion. If you think things are bad now, just wait until 2050 when the county's population is estimated at 4 million, with a proportionate number of vehicles that will cause perpetual gridlock, presenters said.

The agency, which gets its funding from San Diego County and the 18 cities within the County, came up with "five big moves" that it hopes can remove a big chunk of the traffic from the roads and prompt people to think about taking mass transit first before getting into their cars.

“The idea is to create more options so that people look at taking alternative transportation,” said Ray Major, SANDAG’s chief economist. “The goal is to get more people to take other types of transportation so that takes more cars off the freeways.”

The five big moves are:

While most council members saw parts of the new system they liked, they were unanimous in their concern of how the agency would pay for the costs, and the possibility of SANDAG re-allocating already committed funds for improvements on freeways including the 52, the 125, and 67, all of which greatly impact Santee.

Council members noted that local voters had approved the extension of a gas tax called TransNetto get the funds needed to make those highway improvements, and they expect SANDAG to honor those commitments.

Hasan Ikhrata, SANDAG’s executive director, said contrary to what some were saying, there has been no decisions on the proposed system revamp. He said he didn’t have either the authority to divert existing funding, or the political leverage because Sandag’s board hasn’t taken any vote on the issue.

SANDAG’s presentation didn’t provide any cost estimates, but the scope of its proposal was clearly in the billions of dollars. No question, much better mass transit alternatives are needed, Ikhrata said. Please don’t judge mass transit by what the county currently has, he asked, answering several who criticized the trolleys and buses as serving a small minority of commuters.

“If you want mass transit then you have to make it as convenient as driving a car,” Ikhrata declared.

At the outset of his presentation Ikhrata, said the proposed plan was both ambitious and balanced, but wasn’t set in stone. He is soliciting every community in the county for its ideas, and looking for real dialogue.

The issue is scheduled to come before the full SANDAG board in November.

“Give us a chance…We’re still in the early stages,” he said.

The Santee council heard another presentation later that same evening covering a proposed salary increase for both the mayor and the four council members.

As presented by the city’s salary setting committee, the proposal would boost the salary for mayor from the current $2,842 a month to $4,595 a month in a three-step process, with hikes taking effect in July, November of 2020, and January of 2021.

The salary for council members would increase from $1,686 a month to $2,244 over three pay hikes.

The committee also proposed raising the auto allowance for council members by $10 a month to $360 and for the mayor by $50 to $400 a month.

Mayor John Minto said he was flattered by the big raise, but wasn’t sure the recommendations were acceptable.

Several council members said they could certainly use a bump in their car allowance, or get a cell phone subsidy, but weren’t comfortable voting on the pay hikes until the city’s finance staff reviewed the numbers and told them how the increases would affect the overall budget.

The Council asked staff to bring back some options at its next meeting on July 24.

LG is a poor little town that wants to call itself a city. Some major streets were concrete and as they aged the material developed cracks that were  "repaired" by pouring a ribbon of hot tar in the cracks. That resulted in the cracks becoming little bumps that would shake the crude suspension of cars of that era. Later the streets were paved with asphalt but the bumps were still there after the asphalt was driven on for a while.

My parents bought a house on Mercury Drive around 1956. It was a dirt road  then.. It was paved a few years later and curbs were added. Today there are fist size chunks of asphalt on the street and square foot potholes. The street now has heavy traffic because the San Miguel school staff use it as their parking lot and busses  pick up and drop off students.

You should Google and find it. Lot's of planning on technology not invented yet and trying to force you into busses and the trolly. SANDAG is out of control.

For the third time this calendar year, I have submitted a road maintenance disrepair form regarding the potholes and escalating damage to El Monte Rd., Lakeside Ca. I am wondering why, and it could be the work of Sandag. It is?

I've complained about one in my neighborhood  in the unincorporated part of La Mesa that got fixed and there's another even worse I need to call and report.  One of our reporters in El Cajon is complaining about some there.  Driving around the county, there seem to be a lot more rough roads than usual, likely due mostly to weather though in areas with construction there could be other reasons.