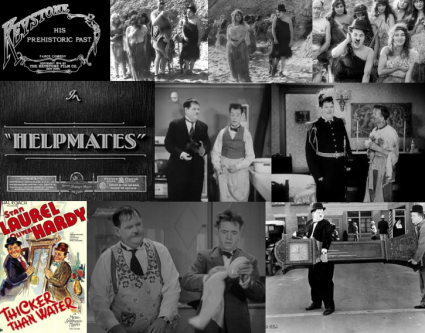 July 27, 2022 (Spring Valley) - The Saps at Sea, the San Diego chapter of the Sons of the Desert, the official Laurel & Hardy fan organization, will host their August gathering, "Caveman Comedies", on August 13 at 7 p.m. at Williams Hall at Trinity Church in Spring Valley.

The Saps are turninng back the clock to prehistoric times with Stan and Ollie in Flying Elephants.  This month's guest comedian is Charlie Chaplin as a cave guy who wants one of the caveman king's many wives in His Prehistoric Past.

After intermission, the Saps will start with one of the very best Stan “helping” Ollie films, Helpmates.  Add a bonus short, Thicker Than Water, a crazy cartoon, the world-famous SAPS Raffle, some surprises and the evening promises laughs galore.

In addition, three Grand Sheiks will be visiting the Saps:

​Doors open at 6:30 with the show starting at 7.  For more information, visit the Saps at Sea Facebook page.