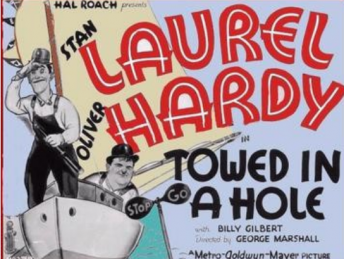 June 5, 2019 (Spring Valley) - Saps at Sea, the San Diego chapter of the Sons of the Desert, the official Laurel & Hardy fan society, invites you to their next meeting on June 29 at 6:30 p.m. in Williams Hall at Trinity Presbytarian Church in Spring Valley.

After the cartoon, the Saps will screen 1933's Busy Bodies.  Next, our guest comedian is Charlie Chaplin in the hilarious PAY DAY (1922). Charlie works hard all day at a construction site. Can he hide a little bit of his paycheck from wifey?

After intermission, Russ Peck will perform an original score on a brand new/old portable organ he restored to 1928's The Finishing Touch.

Author Randy Skretvedt with have the paperback version of his book "Laurel and Hardy - The Magic Behind the Movies" book for purchase. Plus, the Saps will have a raffle and Stan & Ollie movie poster auction.

This month's guest comedian is Charlie Chaplin in 1922's Pay Day.  The doors open at 6:30 with the show starting at 7:00 p.m.  For more information, visit the Saps at Sea San Diego Facebook page.