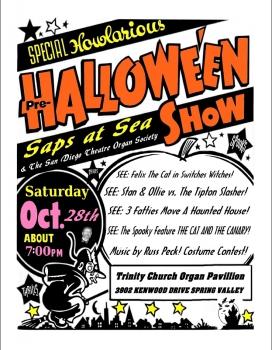 October 7, 2017 (Spring Valley) - Saps at Sea, the San Diego chapter of the Sons of the Desert, the international Laurel & Hardy fan club, presents their Halloween program, Howlarious HalloScream! on October 28 at 7:00 p.m. at Trinity Presbytarian Church in Spring Valley.   The Saps are teaming up with the Theater Organ Society of San Diego and both groups' very own Russ Peck will be playing organ accompanyments to the films.

It's a Night of Silents, with plenty of spooktacular films from the silent era sure to give you nightmares!  The cartoon foro this month is Felix the Cat in 1927's Switches Witches.  Next, Stan and Ollie are hired to protect Judge Foozle from the creepy Tipton Slasher in Do Detectives Think?, also from 1927.  There will also be a surprise Laurel & Hardy film!

This month's guest comedian is The Three Fatties in 1926's Heavy Love.  After intermission delights, the Saps will screen the spooky silent classic, 1927's The Cat and the Canary.

Come in costume for a costume contest!  Note to all Saps members:  check in at the Saps table to receive a member discount of $7.  Doors open at 6:30 p.m.