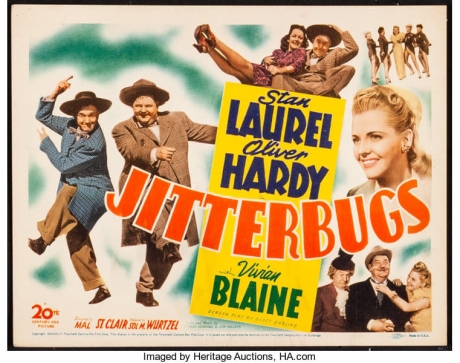 March 31, 2022 (Spring Valley) - The Saps at Sea, the San Diego chapter of the Sons of the Desert, the worldwide Laurel and Hardy fan organization, present their April program, "No Fooling!", on Saturday, April 30 at Williams Hall at Trinity Presbytarian Church in Spring Valley.

The cartoon for April is Tex Avery's The Cat That Hated People (1948).  The silent Laurel and Hardy film is Call of the Cuckoo (1927).  Max Davidson moves into a dilapidated house that happens to be next to a sanitarium! Some of the inhabitants happen to be Stan, Ollie, Charley Chase & Jimmy Finlayson!

April's guest comedian is Harry Langdon in The Shrimp (1930).  Harry is a timid little guy, who, after taking an experimental drug, gets revenge against those that bullied him.

After intermission, the Saps screen the Laurel and Hardy feature film Jitterbugs (1943).  There will be some surprise treats and clips.  The doors open at 6:30 p.m. with the show starting at 7 p.m.  For more information, visit the Saps at Sea Facebook page.