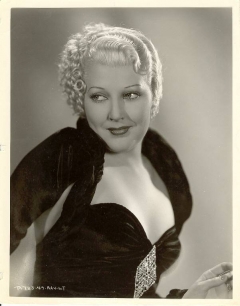 June 27, 2017 (Spring Valley) - Thelma, Stan & Ollie - the next gathering of the Saps at Sea, the Laurel & Hardy Sons of the Desert association in San Diego, high-lights one of their favorite gals, Thelma Todd. This bubbly blonde was not only a highly respected actress and comedian, but a long time favorite of the Saps.

The Saps start off the show with a side splitting cartoon. Then, Thelma is married to Cop Edgar Kennedy, and they are fortunate(?!) enough to live next door to those lovebirds, the Hardys. When Ollie brings Stan over for a delicious "Home" cooked meal prepared by wifey Mae Busch, hilarity ensues in UNACCUSTOMED AS WE ARE (1929). By the way, this is the first sound short made by the boys! Then Thelma appears in her very own short as the guest comedian in a surprise short! 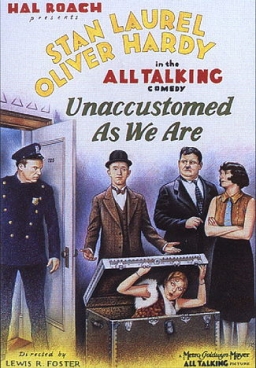 After an intermission filled with tasty treats and refreshing beverages, the Saps will screen ANOTHER FINE MESS (1930). Thelma appears as Miss Plumtree. The conversation between Thelma and Stan (in drag as Agnes the Maid) is one of the greatest scenes in all of Laurel and Hardy-dom. You will also see a filmic surprise in the second half. If that were not enough, Grand Sheik Gene Sorkin of The Chimp Tent will appear in person and will have some Nutty News on the next Sons of the Desert Convention in Cincinnati in 2018. Another great evening is guaranteed for all.... or most of you. Thelma will see you there.