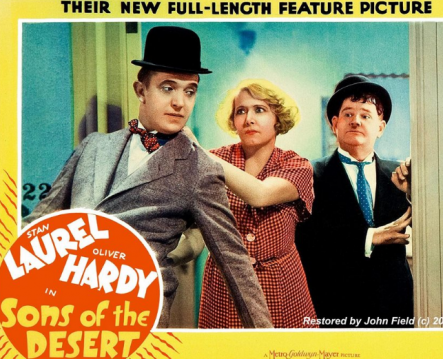 April 1, 2019 (Spring Valley) - Saps at Sea, the San Diego chapter of the Sons of the Desert, the official Laurel and Hardy fan organization, have announced their April meeting, "Sneaky Spouses and Wiley Wives," on April 27 at 6:30 p.m. at Trinity Presbytarian Church in Spring Valley.

The Saps will screen a cartoon, then 1931's Come Clean, with this month's feature film being The Sons of the Desert (1933).

This month's guest comedian is Charlie Chase in Hasty Marriage (1931).  Cake and refreshments will be served.  The doors open at 6:30 p.m. with the show starting at 7.

For more information, visit the Saps at Sea Facebook page.