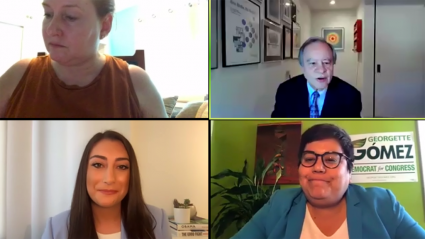 View the link to the full forum here:  https://www.youtube.com/watch?v=hQasnog4dBk#action=share

October 4, 2020 (San Diego) - Congressional candidate Sara Jacobs suggested Saturday that “the generals and the military” would play a role in removing President Trump from office if he loses the election but won’t cede power.

The young Democrat’s remark came late in an hourlong Zoom debate with rival Georgette Gomez in the race to replace veteran incumbent Rep. Susan Davis in the 53rd District.

Moderator Chris Jennewein asked: “What do you think our government should do if President Trump refuses to leave office in January?”

Jacobs began by citing her work in the Obama State Department and the U.N. Department of Peace Operations. She said Congress should first vote funding for an election as “credible as possible and … [mitigate] any kind of foreign influence.”

But then she said: “Honestly, a lot of this is going to come down to what the generals and the military decide to do. And I am hopeful, and I believe, that they will make the right choice on the side of the American people. And then it’s going to be on all of us to take to the streets and to not allow someone to steal an election that they didn’t win.”

She concluded by saying she’s seen this happen in places like South Korea and Hong Kong.

“People power can overcome all this,” Jacobs said, “and I’m confident that we’ll be able to.”

Gómez, during her 2-minute turn at the topic, didn’t address the aftermath issue.

“I would say we need to ensure that we’re countering the misinformation that Trump is putting forward right now,” she said. “We need to be very consistent on our strong message that everybody’s vote is very critical, and it’s going to be counted.”

Moderator Jennewein, editor and publisher of Times of San Diego, asked nine questions during the debate sponsored by Indivisible San Diego Persists, touching on policing, affordable housing, immigration, a wealth tax, Medicare for All and the U.S. role in the world.

Gómez, the 44-year-old San Diego City Council president, had several chances to attack her 31-year-old rival on her wealth as granddaughter of Qualcomm’s co-founder or dissect her tax returns. Jacobs had chances to rebut Gómez TV commercials depicting Jacobs as a supporter of Trump’s corporate tax cuts.

Instead, they stuck to campaign themes — Jacobs as the progressive millennial with federal experience ready to “hit the ground running” and Gómez as the up-from-the-barrio fighter for social justice who found ways to move San Diego’s needle even with council Republicans’ support.

Unlike in the recent presidential debate, Jennewein didn’t have to step in to repeat the rules.

He said: “Let’s keep this not like Tuesday night.”

But Jacobs and Gómez rarely reacted to what the other was saying. They occasionally read from scripts — their eyes darting to the sides of their screens during opening and closing statements.

One wrote: “Is it a conflict of interest that Sara Jacobs’ grandparents have formed a super PAC (Forward California) that they are using explicitly to Sara Jacobs’ benefit — pouring millions into her campaign? These PACs are supposedly ‘independent’ — but how can she be independent from her family?”

Another said: “georgette having no money makes her a pawn like Todd, Sarah is a free thinker and qualified. she doesn’t have to stoop to Georgette’s level saying Sarah supports trump in her advertisements...so hush."

San Diego liberal lion Doug Porter, who covers progressive politics on his Words & Deeds blog, on Thursday wrote: “While I could vote for Jacobs, I will vote for Georgette Gómez.”

Saturday, while watching the debate, he messaged Times of San Diego: “They can talk policy on immigration; ain’t gonna change without fixing the sickness of racism in the agencies charged with enforcement.”

Jennewein asked: “If elected, will you always support the party leadership? In what cases would you prioritize for the district or for your own views over leadership?”

“One of the benefits that I have is the party establishment is supporting my opponent. I’m not beholden to anybody except constituents in this district. And that means that I will make a decision based on what is best for my district in every single instance. … There’s a lot of places where I disagree with party leadership.”

She listed lack of child-care assistance in the original CARES Act. She also wants "automatic stabilizers" in any future bill.

Jacobs said neither party is addressing predictive policing models (which she said “means oversight”), data privacy and artificial intelligence “because, frankly, they don’t understand the technology. They don’t know how to use it. Having more millennials who are social media natives and technology natives is going to be really important.”

Gómez said that during her political rise she quickly saw “our party wasn’t reflective of and not responding to the needs of our … underserved communities.”

Then she parried the “party establishment” jab.

“Yes, I am proud to be endorsed by the California Democratic Party,” Gómez said. “My opponent wanted that endorsement. She couldn’t earn it. … But let me be very clear: My loyalty is to ensure that this country is actually, for the very first time, acknowledging and changing the way we run this country. I’m investing in communities of color … to address these racial disparities that these communities have been living with.”

Jennewein chose the final question from the Zoom Q&A: “If you lose the election, how will you assist the winner?”

Gómez went off on a tangent.

“I’m running to continue to do the work that I’ve been doing my entire life — to create a society that is more inclusive,” she said. “I’m running to make national history by electing the first queer Latina in the nation to be voted into Congress. … that comes from the barrio. I’m going to continue fighting for inclusion.”

Jacobs said she “proved” her party loyalty in the June 2018 election — when she fell short of the top two in the 49th District primary, taking a close third in the race with Democrat Mike Levin and Republican Diane Harkey.

“When I lost my election, the very next day I got up and I made sure that the Democrat who won got the support he needed to beat the Republican and flip that seat,” she said, asserting that she worked with down-ballot candidates across San Diego County “to make sure they were able to win their races.”

“Campaigns are about how we inspire the next generation of leaders,” said Jacobs, boasting of a paid internship program for young people in her current campaign.

Organizers said 200 registered to watch the debate and as many as 100 attended — with 28 also watching on YouTube livestream (which started a little late). The whole Zoom session is posted here.

It was their second virtual debate this week, coming two days after one at Politifest hosted by Voice of San Diego. Earlier, the pair took part in a Hillcrest Indivisible event Sept. 2 and the Black American Political Association of California event Sept. 19 with other San Diego congressional candidates.

The next online meeting* of the Democratic duo will be at 7 p.m. Oct. 17 — an event hosted by Bankers Hill Community Group and facilitated by the League of Women Voters. (Register here.)