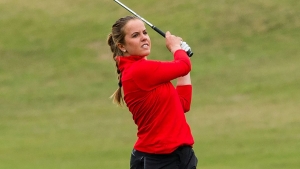 Aztecs climb to third place as a team after 36 holes

With her card, the Aztec junior vaulted nine places on the individual leaderboard into a tie for seventh at 5-under 139, heading into Wednesday’s final round on the par-72, 6,261-yard Tom Fazio Course.

Collectively, SDSU jumped three places in the standings, finishing the day in third place at 1-over 577 after posting the third-best team score of 3-under 286. Despite the upward mobility, the Aztecs still trail Ole Miss (-15) by 16 strokes after the Rebels shot a combined 280, giving themselves some breathing room over tournament co-host Denver (-3), while Pepperdine (+2) and UCLA (+4) occupy the fourth and fifth spots, respectively, behind San Diego State.

Kjellker tied for team-high honors with six birdies in round two, including three on her final four holes. Among her drains were impressive conversions at the par-4, 420-yard No. 1 and the par-4, 340-yard No. 12, which rank as the second- and fifth-most difficult greens of the week thus far.

As a result, the Swedish national remains just three shots behind Ole Miss front-runner Andrea Lignell (-8), who notched a second-round 67 to grab a one-stroke lead over Denver’s Anna Zanusso (-7), while three players are tied for third at 6-under, including South Alabama’s Siti Shaari, who carded a tournament-low 66.

Like Kjellker, Bernice Olivarez Ilas (Ayala Alabang, Philippines) also made a significant leap on Tuesday, catapulting 13 places into a tie for 19th at 1-over 145 after firing a 72. The Aztec freshman offset three bogeys with a trio of birdies, including a successful make on the par-5, 510-yard 18th to close out her round. She also recorded a team-high 12 pars, including four straight after a hiccup on the par-4 13th.

Conversely, Gioia Carpinelli (Boppelsen, Switzerland) slipped four spots into the 23rd position at 2-over 146 after settling for a second-round 74. The SDSU junior witnessed a wide range of scores on an inconsistent day, highlighted by an eagle at the par-4, 275-yard No. 3. She quickly followed that success with back-to-back birdies; however, an untimely triple bogey at the par-4 sixth derailed her momentum. Carpinelli then suffered a rash of five bogeys, including four on the back nine, before ending with a birdie on the 18th green.

Meanwhile, Fernanda Escauriza (Asunción, Paraguay) completed a substantial gain of her own, climbing 19 places into a tie for 29th at 3-over 147 after matching Olivarez Ilas with a 72. The Aztec senior also tied Kjellker with six birdies, including an impressive conversion on the par-4, 340-yard No. 12, which ranked as the fifth-toughest hole of the day. However, a plague of four bogeys, as well as double bogey on the par-4 14th, prevented a steeper ascent.

The SDSU starting five also featured April Ranches (San Diego, Calif.), who finished the day in a tie for 58th at 9-ovder 153 after logging a 77. Despite birdies on the No. 3 and No. 8 greens, the Aztec sophomore got off a rough start with five bogeys on the front nine before rebounding with eight pars on the back.

The Golfweek Conference Challenge concludes on Wednesday when San Diego State tees off for the final round alongside Ole Miss, Denver and Pepperdine starting at 9 a.m. MT/8 a.m. PT.