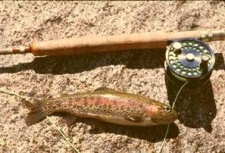 November 3, 2012 (San Diego) – It is a surprise to many that wild rainbow trout still exist in San Diego County. One place they do is on Boulder Creek, at the foot of the towering Cuyamaca Peak in East County.

The San Diego River Park Foundation, in partnership with San Diego Fly Fishers and other organizations supporting wild trout conservation, has launched a project to ensure the survival of the wild trout on Boulder Creek, one of two known creeks in the San Diego River Watershed which support the trout.

The San Diego River Park Foundation announced today that it has successfully completed a critical acquisition along the creek that has three pools where the trout were found.

“This fragile population is at risk of being lost.  It is a tragedy as wild trout used to thrive in these areas and there are few places remaining where stream conditions allow for the trout to survive year round.  These land locked trout are part of our heritage, and it is incredible to be part of an effort to stabilize the population and restore parts of the creek. This small 2.35 acre property is a key piece,” said Rob Hutsel, Executive Director of the San Diego River Park Foundation.

The conservation project is part of the River Park Foundation’s Save the Source Program, a larger effort to conserve critical lands at the headwaters, or source, of the San Diego River.

More than 100 donors came together to purchase the property from the owner who has been very supportive of this effort.  Donations ranged from $2 to $5000.  More than $30,000 was raised in just a few days and with the support of a $85,000 bridge loan the acquisition was completed.  The San Diego River Park Foundation has three years to pay of this loan which was made possible with the support of Mesa Rim Climbing and Fitness Center.

With the success of this acquisition, the San Diego River Park Foundation has reached agreement with the owner of an adjacent 11 acre property to purchase that property if $50,000 can be raised before January 2013.

Fascinating. I had no idea that there are still wild trout this far south. Thanks for the story.