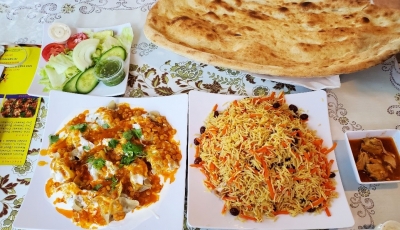 October 26, 2021 (El Cajon) -- East County is quickly becoming the new mecca in San Diego for sumptuous culinary adventures with an array of international cuisine, thanks to our region’s many immigrants and refugees. Adding to East County’s already rich diversity of restaurants is Kabul Kabob House in El Cajon, specializing in delicious and authentic food from Afghanistan.

Owned and operated by Ajrudin Nabizada, an Afghan immigrant, Kabul Kabob House offers probably the tastiest and most genuine Afghan food in San Diego County. The portions are generous and the prices affordable.

Nabizada came to the U.S. with his wife and two children in December 2014 on a Special Immigrant Visa (SIV) after serving as a translator for US Special Forces in Afghanistan. He came to San Diego because his wife’s cousin was living here. Since arriving, his family has enjoyed the birth of their third child.

“We cook all the spices, fresh, into the food when the food is made,” said Nabizada. “Not added afterwards for flavor. We use cumin, coriander, garlic, black and green peppers, ginger, and of course, saffron.”.

“All our chefs are Afghans here,” said Nabizada. “And that’s important because it takes knowing the culture to know how to cook the food. When you try our food, you’ll know.”

Kabul Kabob House enjoys perfect 5-star reviews on Facebook, and 4.7 stars on Google, with comments such as “Best Afghan food in California,” and “Their Mantoo is the best thing I have ever eaten!”

Following Nabizada’s recommendations, we ordered the Mantoo (beef and onion dumplings), and Qabili Palaw (rice, carrots, raisins and beef), with a sid 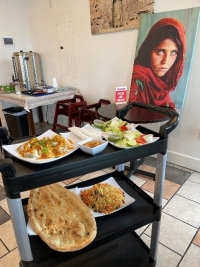 e order of tandoor bread. The portions were so large that everything had to be brought out to us on a cart, with food spread on two levels. The aroma from the spices and flavors of the dishes were what you dream of.

The portions are very large. Either order would have been large enough to feed both of us. The Tandoor bread, only $1.50, was larger than a pizza, and was freshly made, still hot, soft and delicious. The slow-cooked beef in the Qabili Palaw, which was nested in a  pile of yellow rice, was so tender that you could shred it with your fork. The Mantoo, in contrast, was lighter, creamier, and equally savory.

A side salad came with a zingy and flavorful chattni, a spicy chutney-like sauce with mint and green chili pepper seasoning, along with a yogurt dip.

The food at Kabul Kabob House is so good that I really can’t find the words to do it justice. It has become 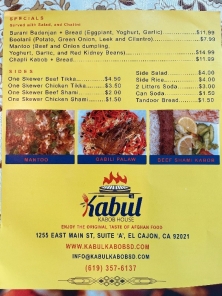 my new favorite restaurant in San Diego. Not only is the food beyond compare, but the people are so very kind and friendly.

The most expensive item on the menu is only $15.99. If Kabul Kabob House were located downtown, or in La Jolla, the same items could easily be two or even three times more expensive and customers would still be happy because of the quality of food they enjoyed.

In addition to the menu items, customers can also purchase hand-picked, organic saffron from Afghanistan at the Kabul Kabob House. When Nabizada’s niece came from Afghanistan, she brought 40 small bottles of pure, organic Afghanistan saffron with her. There are only 15 left and when those are gone, they’re gone.

much as we enjoyed the food, meeting and speaking with Nabizada was and equal delight and pleasure.

Nabizada speaks perfect English. “I learned English in Afghanistan by taking private English courses,” said Nabizada. “I then went through the two-year Certified Accounting Technician (CAT) program offered by Oxford University in London, which had a program in Afghanistan. After that, I started working with US companies.”

Commenting on his experience working with the US Army, Nabizada said, “Working my American colleague in Afghanistan was a great experience for me. I still keep in touch with a couple of my US military friends from Afghanistan.”

He first worked as an Uber driver while saving up to start his own restaurant. Nabizada hoped to open Kabul Kabob House in June 2020, but his plans and efforts were thwarted by the pandemic shutdowns.

He was finally able to open on January 1, 2021. Business was slow at first, because people were still wary of the pandemic, but has been steadily picking up as his reputation begins to grow – both among newly arriving Afghan immigrants and food-lovers of all origins. 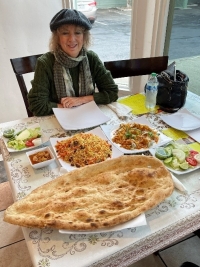 Now he is giving back to help others after the U.S. troop pullout in Afghanistan, offering 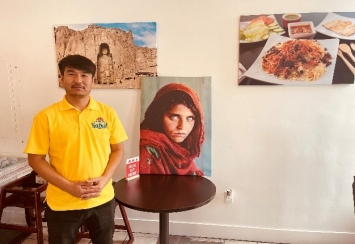 discounts to the new wave of Afghan immigrants arriving in East County.

Kabul Kabob House is conveniently found at 1255 E Main Street in El Cajon, easily accessible from I-8. Patrons can dine in, take out, or purchase halal meats to cook at home.

More information about Kabul Kabob House can be found at https://kabulkabobsd.com/.