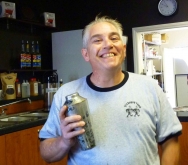 By Miriam Raftery
September 1, 2012 (La Mesa)—At Bugsy’s Brew Coffee, La Mesa’s newest java joint, owner Dan Moran serves up some colorful history along with coffee drinks named after famous gangsters such as Al Capone, Lucky Luciano and Ma Barker. The shop's slogan, “So good it should be illegal,” also hints at a delicious whiff of controversy.
“I named the place after my grandfather,” says Moran, a San Diego native with an infamous family tree.
His grandfather, George “Bugs” Moran, ran Chicago bootlegging operation during Prohibition. Moran's gang was gunned down in the notorious St. Valentine’s Day massacre in 1929, reportedly on the orders of Al Capone. Ironically, Moran’s life was spared--thanks to a coffee shop. 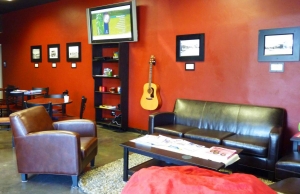 Capone’s hit men were disguised as police. Spotting the officers, Moran thought a raid was in progress and took refuge in a coffee house, escaping the attempt on his life. He continued his illustrious life of crime until 1956, when he was arrested for bank robbery and died the next year in prison.
Today, Bugsy’s Brew also brings local history to life with vintage photos of La Mesa, fitting touches in this cen 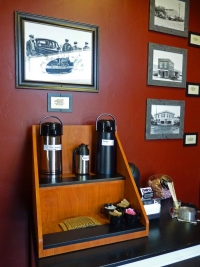 tennial year.
If you like strong brews, mosey on over and pour yourself a piping hot cup of Cowboy Coffee. For a milder brew, Bugsy’s offers a San Diego Sunrise option.
Or choose from a wide variety of mixed hot or iced coffee drinks, including such local favorites as the Mt. Helix or the La Mesa Mocha.
All coffees are ground locally. Bugsy’s offers Ryan Bros. Coffee roasted with Fair Trade coffee beans. The menu also includes many kid-friendly options, such as vanilla cream and chocolate dream drinks, as well as Mad Dog’s Pinkie Surprise.
The shop also offers flavorful pastries cooked up by The Desert Tray, owned by La Mesa resident Diane Tesla. Moran and his family also live in La Mesa. 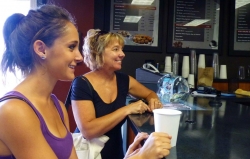 The setting is cozy and charming – a quiet place to while away a morning or afternoon, reading, studying, playing games, visiting with friends or simply sampling some creative coffee concoctions. A leather couch, chairs and tables, and a cheery red beanbag chair make this one of the most comfortable coffee shops around.
Wi-fi is available and the shop is open until 9 p.m. on selected evenings, a plus for students and others seeking a caffeine fix after many other local coffee spots are closed. A wide-screen

offers video games for customers’ amusement.
I especially appreciated the lack of loud music to drown out conversation—a downside of all to many establishments these days. There’s a guitar on a stand, however, for guests with musical talents—and Moran aspires to add some entertainment options down the road.
The shop is tucked into a brick-façade building at 8759 La Mesa Boulevard, at the corner of Jackson Drive and La Mesa Boulevard.
If you’re looking for a cool place to savor some freshly brewed coffees in a warm and inviting setting with a friendly owner who enjoys lively conversation, then Bugsy’s Brew is the place for you.
For more information, visit www.BugsysBrewCoffee.com