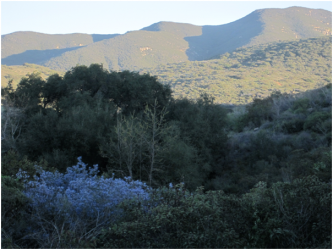 October 4, 2015 (San Diego’s East County)—Caltrans is weighing whether or not to grant state scenic highway designation of State Route 52 from Mast Boulevard in Santee to Santo Road in San Diego, where the highway passes through Mission Trails Regional Park.  Preserve Wild Santee began seeking the designation in 2012 and the San Diego City Council passed a unanimous resolution in support in 2013, yet Caltrans has not yet taken action.

Save Mission Trails and Preserve Wild Santee are both asking the public to send letters urging support of the scenic highway designation to preserve the natural beauty of this area from projects such a power plant proposal recently withdrawn by the developer.  Save Mission Trails has provided a sample letter that you can sign and send to those listed below.

Note to our readers: Please send us your best photos taken alone highway 52 between Mast and Santos Road! We will publish the most scenic and beauitful photos.

Please grant San Diego and Santee's request for scenic highway designation for SR-52. The views in and adjacent to Mission Trails Park are irreplaceable, distinctive and beautiful. The views are of great value to our region and the state. As Councilmember Scott Sherman has stated, "A Scenic Highway designation for SR-52 from Mast Boulevard to Santo Road will bring recognition to the area adjacent to the park for its scenic views as residents and visitors drive from San Diego's coast to its mountains. The designation may also assist in preserving the natural beauty of the area."

The designation is long overdue as the original unanimous resolution was adopted in 1995, unanimously supported by Santee in 2013 and all Caltrans required documents have been completed and submitted for consideration. Please act swiftly to grant state scenic highway designation for SR-52.