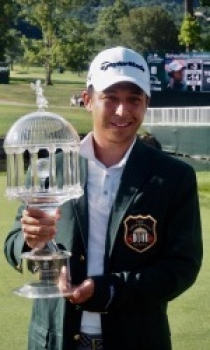 A rookie on the Tour this season, Schauffele fired a 3-under-par 67 during the final round, finishing the tournament at 14-under 266 to edge runner-up Robert Streb (-13) by one stroke on the par-70, 7,286-yard Old White TPC course at Greenbrier Resort.

With his victory, Schauffele clinched a spot in the British Open at Royal Birkdale later this month as well as berths in the 2017 PGA Championship, the 2018 Masters and the 2018 Players Championship. In addition, the Aztec alumnus earned a two-year exemption on the PGA Tour and climbed from the 94th position to 27th in the latest FedExCup standings.

On Sunday, Schauffele owned a share of the lead with Streb before stepping up to the par-3, 161-yard 18th, where he used a pitching wedge to stick his tee shot to within three feet of the pin. The three-time all-Mountain West honoree subsequently drained his birdie putt, while Streb and third-round leader Sebastian Munoz (T-3rd, (-12)) misfired on birdie opportunities at No. 17.

Shortly thereafter, Streb had a chance to force a playoff, but his chip from the left rough on No. 18 went awry. Likewise, Munoz needed an ace to extend the round, but had to settle for par, sealing the win for Schauffele, who tied for fifth at the U.S Open last month in Erin, Wisconsin.

“The U.S. Open was a huge moment in my career,” Schauffele said in the post-tournament press conference. “It was one of the biggest stages and for me to kind of be calm and collected throughout the week and just kind of hang on and come in tied fifth was huge for me mentally, so it kind of gave me the confidence and allowed me to play and win this week.”

At age 24, Schauffele becomes the 12th player under the age of 25 years to win on Tour this year, the highest total since 1970. The three-time all-Mountain West Conference performer also led all players this week in greens in regulation at 81.94 percent (59-for-72), becoming the third rookie to win the event, joining Ted Potter Jr. (2012) and Scott Stallings (2011).