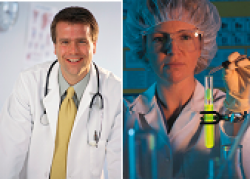 September 25, 2014 (San Diego’s East County)-- Our Health and Science Highlights provide cutting edge news that could impact your health and our future.

Your medical information is worth 10 times more than your credit card number on the black market.

Nurses to march on Vegas Strip about Ebola prep (SacBee)

Nurses who say U.S. hospitals aren't ready for an Ebola outbreak are planning to stage a Las Vegas Strip protest to call for action.

Long-term use of pills for anxiety and sleep problems may be linked to Alzheimer's, research suggests. A study of older Canadian adults found that past benzodiazepine use for three months or more was linked to an increased risk (up to 51%) of dementia....

Women who ate two or more servings of fish per week had a 20 percent lower risk of hearing loss, according to Dr. Sharon Curhan, a researcher at Brigham and Women's Hospital and co-author of the study.

San Diego neuroscientists have discovered an unusual connection leading to a part of the brain associated with depression.

NASA says that a ban on CFCs enacted in the 1980s has contributed to a 4 percent rebound since 2000 in atmospheric ozone in mid-northern latitudes.

…In summary, the only benefits have been for the transnational companies. There has been a high cost to the environment, which continues to be damaged by climate change

Many popular websites Wednesday featured the "spinning wheel" that typically greets users with slow Internet connections. It was a symbolic statement to voice support for net neutrality.

Cars that drive themselves starting to chat with each other (Reuters)

An Acura RLX sedan demonstrated an unusual way to tow another car this week: the vehicles were not physically attached. The second car drove itself, following instructions beamed over by the first in a feat of technology that indicates a new stage in automation is happening faster than many expected

The fate of Capt. Sir John Franklin and crew has been a mystery for more than 160 years, but now Canadian archaeologists believe they've found one of the expedition's two main vessels.

Archaeologists have unveiled the most detailed map ever produced of the earth beneath Stonehenge and its surrounds.  Early results suggest that the iconic monument did not stand alone, but was accompanied by 17 neighboring shrines.