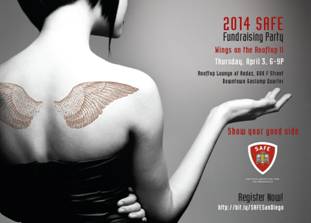 March 29, 2014 (San Diego) - The San Diego Advertising Fund for Emergencies (SAFE), a volunteer, non-profit organization (501c3) providing confidential financial assistance to local advertising and marketing professionals and their families facing a life crisis emergency, will host its 13th annual fundraising party from 6 to 9 p.m. on Thursday, April 3, at the Ivy Rooftop Lounge atop the Andaz Hotel, 600 “F” St., in the Gaslamp District in Downtown San Diego.

The party, SAFE’s major fundraiser of the year, will feature food, networking, entertainment and a silent auction to benefit grant recipients. Theme of the party is “Rally on the Rooftop.” Cost to attend is $50 per person, $30 per person for students, or $70 per person at the door. For tickets and more information, visit www.aboutsafe.org.