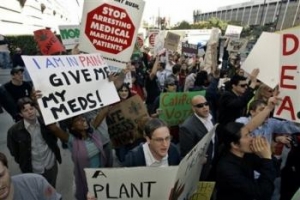 It allows medical cannabis dispensaries to exist in designated commercial and industrial areas of the city with large buffers from sensitive areas, including a 600 foot buffer from schools and parks and a 1,000 foot buffer between dispensaries.  The proposal also contains additional strict operating requirements including security systems, restriction on hours of operations and signage.

"We want there to be access in San Diego City," stated Ken Cole, a cancer patient and president of the United Patients’ Alliance, the trade association of medical cannabis distributors. "However, we also want operators to behave in a responsible manner, where the patients and public can feel safe and respected. Mayor Filner's proposal provides both access to patients and enhanced safety to the community. "

Bob Riedel, vice president of the United Patients' Alliance, who formerly operated the only licensed medical cannabis dispensary in the county of San Diego (in El Cajon), agreed.   "What the county enacted was a good start, but while it succeeded in creating oversight, it failed at the ultimate goal of giving patient access,” he said. “Mayor Filner's proposal achieves both - patient access and public oversight."

While there has been speculation in the media about a possible public vote or referendum, medical cannabis collective operators dismiss this possibility.   "As long as the Council respects the spirit and purpose of Mayor Filner's proposal," said Cole "we see absolutely no reason this issue cannot be resolved our elected officials.”

The ordinance will be heard by City Council on April 22nd.  The United Patients’ Alliance, Americans for Safe Access and other allied groups plan to be present to give their testimony on what this proposal means for patients in San Diego County.    "We look forward for to the day when Cancer, MS, Aids, and all severe pain patients can have regulated access to affordable, natural, cannabis medicine in San Diego City," stated Ken, "and, thanks to Mayor Filner, this day may soon come."