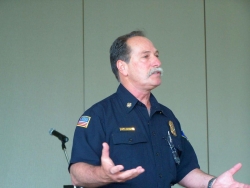 August 30, 2009 (San Diego) – Firefighting resources from San Diego County’s region have been dispatched to battle the wildfires that have forced thousands to evacuate in the Los Angeles area. But August Ghio (photo, left), head of the San Diego County Fire Chiefs Association, expressed confidence today that San Diego still has adequate resources to respond promptly if a wildfire should start here amid the current intense heat and dry, fire-prone weather conditions.

Asked if he is confident that San Diego still has adequate resources to respond adequately should a major fire start here, Ghio replied, “Yes. What we’ve done is hold back a lot of resources. We still have a great deal of surge capacity with reserve apparatus and off-duty reservists as well as helicopters. “
That preparedness was put to the test briefly this morning, when a five-acre brush fire ignited in Ramona was swiftly extinguished.