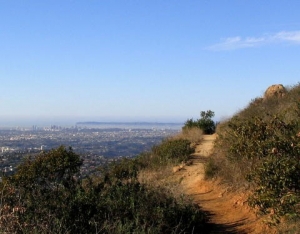 December 6, 2014 (San Diego’s East County) - A mountain of a mere 1,594 ft. high borders three cities -- San Diego, Santee, and La Mesa. For some, it's an epic hike accompanied by packs filled with snacks and water. For others, it's a quick jog up and a small water bottle waiting for them back at their car. No matter who you are -- everyone seems to love this mountain.

Three main trails lead to the summit. Two of them are three miles round trip, and the other is a seven mile round trip from the Santee side (Big Rock Park). The mountain is always crowded with hikers, especially on the weekends. I call it an “urban hike” because it’s very accessible and considered the highest point within the San Diego city limits.

In the early evenings after the sun has gone down, step outside and try to see the mountain. If you are looking at the west or south side faces -- there is a good chance you can see lights from hikers ascending or descending the trails.

A favorite time for my wife, dog, and I to go is at night. Sometimes we'll go during the week around 9-10 pm and park on Barker Way (most people know this as the back side). We gently close are car doors so not to disturb the neighbors, grab a few doggie baggies out of the dispensers, then off we go. The trail is a mile and a half to the summit, all wide fire roads.

Most people use headlamps or flashlights to guide them, but we love being out there in the dark. We try to keep track of all of the shooting stars we spot. Sometimes we see up to three, and other times we're completely skunked. As surprising as it sounds (because of the geographical placement of the mountain being in the “middle” of the city) -- the shooting rockets are there and at times spectacular. Full moon nights are very popular on the mountain, but I prefer the darker nights for the stars.

After the first long climb on the fire road, it levels off into this long valley. Here is where you start to feel the crisp breeze and you can see the upper mountain from here. This is where you see the lights from other hikers scattered up and down the trail. Usually we go late enough to where most of the other hikers we cross paths with are descending.

When you start getting higher on the upper pyramid of Cowles, this is when the city unveils itself to you. The sparking lights stretch from La Mesa all the way to Tijuana. It's beautiful! Here is where all of our problems of the daily grind just seem to deflate and you take in your surroundings along with a sigh.

When you reach the summit -- the view gets even more spectacular. You get a complete 360 degree view of San Diego County as you stand on this island surrounded by a sea of lights.

Even at 10 p.m., there can be up to 30-50 other hikers on the summit taking in the same experience. This hike has recently become very popular. The front side that ascends from the neighborhood of San Carlos (trail head is at Navajo Road and Golfcrest Drive) is even more crowded than the route we take. The night hike has become so popular that REI Outdoor School does hikes there, charging $20.00 for members and $40.00 for nonmembers. I recommend just giving it a try on your own.

On the summit, sometimes we just take a few minutes to take in the view, give our dog some water and then quickly head back down. On other nights we'll take a seat on a boulder and pull a small bottle of wine from one of our packs. Either way we always have a great time.

I've trekked a few different places across the globe and I still consider this hike one of my favorites. Give it a try at first during the day then definitely give it a go at night. From a novice to expert -- I guarantee you won't be disappointed. 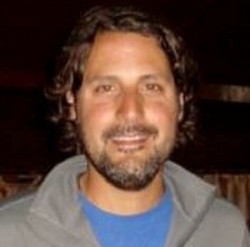 Randy Zuniga has a passion for hiking, mountaineering and trail running.  He’s hiked and run trails across East County from Cowles Mountain to the Laguna Mountains.  He has also climbed peaks in the Sierra Nevadas including Mt. Whitney and Mt. Muir. His quest for adventure has taken him to Nepal, where he trekked three weeks through Khumba Valley to the Mt. Everest Base Camp and participated in the Everest Marathon. In addition, he’s backpacked across Alaska, climbing and traversing glaciers, and climbed Orizaba in Mexico—an 18,500 foot high volcano.

I would like to take my 1 year old and 6 year old up the mountain. A stroller is the easiest way to transport the youngest, plus we can put a small pack in it with water, snacks, etc. I didn't think this was possible on the trails on Cowles but when you mentioned wide fire roads I'm guessing it could work. I know it may be bumpy but we can live with that ;) What do you think?
I can see Cowles Mtn. from my street in Lemon Grove. It's a landmark as is San Miguel Mountain, they are my favorite day and night time views. I drove up the mountain in my parents Mustang when I was in the 13th grade.