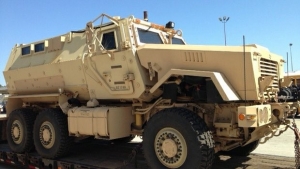 September 19, 2014 (San Diego)—You won’t be seeing an armored vehicle on San Diego Unified School District campuses after all. The District has decided to return a Mine Resistant  Ambush Protected Vehicle, or MRAP, that had been donated by the U.S. Department of Defense.

The District had planned to use the vehicle to respond to emergencies such as school shootings.  But in the wake of the Ferguson, Missouri shooting of an anarmed teen, a national spotlight has been cast on use of armored vehicles by law enforcement and now, school districts.

Some members of the San Diego Unified School District board had indicated they were unaware of the district’s acquisition of the armored vehicle before media reports surfaced. The vehicle, valued at over $700,000 was donated to the district by the Department of Defense through a grant, though the district did have to pay $5,000 to transport it to San Diego.

The district’s Chief of School Police, Rueben Littlejohn, earlier said he thought the MRAP would be an asset to the district in an emergency, UT San Diego reported.

The decision to return the vehicle, valued at more than $700,000, was praised by school board trustee Scott Barnett, who last week announced his opposition to the idea.

School Board member Scott Barnett reacted to then news, stating he believed Superintendent Marten made the right decision to return the vehicle. “I’m glad we will not have a military armored vehicle as part of our fleet,” he said.

Rueben Littlejohn, chief of the district’s School Police Department, said earlier that he thought the vehicle, known as an MRAP, would be an asset to the district in an emergency. But he noted that public feelings about the perceived militarization of law enforcement have changed after the shooting of unarmed teen Michael Brown and the heavy use of military-grade vehicles and equipment by police in response to protesters.

“Public sentiment regarding the use of excess military equipment by law enforcement agencies since the civil unrest in Ferguson, Mo., has pointed to the need to be more sensitive to perception,” Littlejohn said in a statement issued by the district. “The value that this defensive tool would bring cannot exceed the value of retaining the public’s trust, confidence and perceptions of how we will protect our students.”

Even the feds don't want them! That's a clue. These monsters were produced in a hurry and so they have many quality problems. The heavy doors are pneumatic-assisted, and sometimes they don't work, like when the engine quits. You are trapped inside. They are expensive to maintain, particularly if they just sit out back for an extended period. They are top-heavy, and can tip over. Then try to get out. The guy in the turret can get clothes-lined by a utility wire. Need to change a tire? Go for it. How many mines have been emplaced recently on San Diego roads? Very few, I bet. Ambushes? Ditto. Some asset. It would look nice parked by the Lazy Lizard down in Ocotillo, though. And there are no schools there.
Dumbest idea ever. Just imagine the maintenance costs on a vehicle like this. How does the District get rid of Mr. Littlejohn? He shows poor judgement.
I'll take it!! Or maybe Jim in Ocotillo can use it to cruise around the desert in style!
Parke Ewing, the two photographers who had to get restraining orders since Pattern Energy wouldn't do the decent thing and fire the guy for physically assaulting Parke and threatening to harm Jim -- just because of photos they shot on OUR public lands to document serious issues at the wind project -- which by the way is offline AGAIN for the past few days for undisclosed problems. What a boondoggle! Yep, Jim and Parke need an armored vehicle more than the SD schools, that's for sure! ;-)