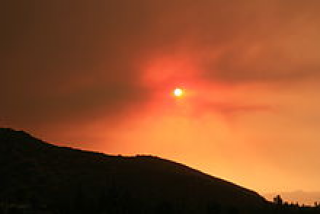 By Miriam Raftery
May 12, 2019 (San Diego) – San Diego Gas & Electric Company (SDG&E) is asking the U.S. Supreme Court to declare it unconstitutional for states to make utilities strictly liability for wildfire damages without allowing companies to recover costs by charging ratepayers.
SDG&E has failed in its previous regulatory and judicial efforts to persuade state regulators or California Courts to allow reimbursement for the company’s $379 million in uninsured losses in the 2007 wildfires. Cal Fire and the California Public Utilities Commission found SDG&E poorly maintained equipment to be responsible for starting the 2007 Witch, Guejito and Rice fires, though SDG&E has denied responsibility, blaming extreme weather conditions.  Those three fires killed two people, injured 40 firefighters and burned down 1,300 homes.
The company, in its brief filed with the nation’s highest court, argues that the CPUC turned down SDG&E’s request to charge ratepayers for its losses “based on erroneous findings of fault…“As a result, SDG&E is forced to be the insurer of last resort for wildfire damages, even when the damages occurred due to circumstances beyond our control.”
But Loretta Lynch, a former CPUC president now representing Protect our Communities Foundation, a consumer group involved in the case, accuses SDG&E of attempting a “Hail Mary pass” to deny its “negligence for causing San Diego wildfires,” the San Diego Union-Tribune reports. She voiced confidence that the Supreme Court would deny the appeal, leaving the California Supreme Court decision to stand.
Pacific Gas & Electric (PG&E) and Southern California Edison (Edison) are also named as parties in the proceeding.  If the Supreme Court does intervene, a ruling could have potentially huge impacts on those companies, which are accused or suspected of causing massive wildfires that caused more than a billion dollars in damages.  PG&E recently declared bankruptcy after the 2018 Camp Fire, which killed 86 people and destroyed the town of Paradise, California.
Former San Diego City Attorney Michael Aguirre represents SDG&E ratepayer Ruth Henricks in the litigation. He criticized SDG&E for spending ratepayers’ money on what he calls a “frivolous constitutional case because their damage was caused by their own negligence. It wasn’t based on strict liability.”

For a company that produces "nothing" and has a golden halo over the heads or Corporate, as well as the Public Utilities Commission, they easily spend money that "they" did not earn, but we paid in their continual escalating rate structures. You can be assured that attorney fees come out of "our" pockets for their legal nonsense.
We've been down this proverbial road before. How many more times must we travel it? I wonder how wealthy the SDG&E shareholders are. Can't these costs be absorbed as part of doing business, or possibly written off as a loss in their tax returns? Maybe SDG&E should buy fire insurance like homeowners do. As if our energy rates are not high enough already - and getting worse.