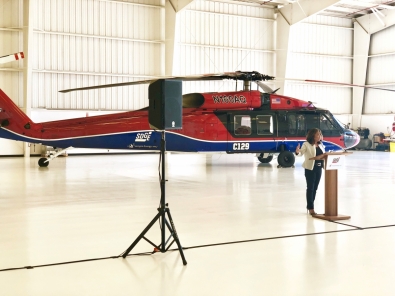 A  UH-60A Firehawk contracted by SDG&E for year-round firefighting in our region collided in midair with a U.S.  Navy MH-60R Seahawk with three crewmembers aboard.

Despite the damage, crews and their families have much to be thankful for. "Both aircraft landed safely and there were no injuries to personnel," said ENS. Bryan Blair, Assistant Public Affairs Officer for Commander, Naval Air Forces, NBC 7 reports.

An August 2019 press release from SDG&E had a photo of the helicopter involved in Tuesday’s collision.  An SDG&E spokesperson stated, “We have been made aware of the incident by our contractor who owns and operates the aircraft and the most important thing is that all parties are safe.”

The Firehawk had been contracted by SDG&E since 2019 for “year-round, rapid response dispatch by CAL FIRE.”  According to SDG&E’s news release, “The UH-60 Blackhawk can fly up to 140 mph with a tank of water while enroute to a fire. It holds 850 gallons of water and refills in 45 seconds."

This is the second aerial asset that SDG&E has been making available to the region for year-round fire suppression. The first is the Erickson Aircrane that holds 2,650 gallons of water or fire suppressant and is the largest water-dropping helitanker in the country.

The cause of the crash remains under investigation by the Federal Aviation Administration (FAA).

It is unclear how severely the helicopters were damaged, or whether SDG&E will repair or replace the damaged firefighting helicopter.