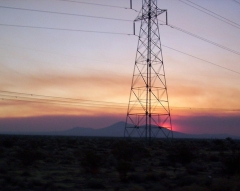 At a contentious first meeting in Lakeside, SDG&E officials promised to respond to citizens' concerns in a follow-up meeting. Lakeside's new fire chief, Andy Parr, missed that meeting but pledged to attend the subsequent public meeting.  SDG&E has since cancelled two followup meetings in Lakeside, one due to weather and a second due to conflicts with the Lakeside Rodeo calendar.

SDG&E also failed to notify East County Magazine directly about these meetings, despite our repeated requests to be notified so that we can inform the public. Our thanks to an alert reader who forwarded us this schedule.

Lakeside residents have voiced concerns that the project poses a severe fire threat and note that the environmental impact report calls Powerlink a class 1 threat, the highest threat a project can have, and that it cannot be mitigated.  They further argue that presence of the overhead transmission line would reduce effectiveness of firefighting as well as raising risks of a catastrophic wildfire in an area already ravaged by the Cedar and Witch Creek fires in 2003 and 2007.

Meetings scheduled by SDG&E on Powerlink are: