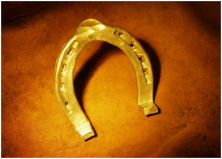 August 29, 2014 (Descanso) –A helicopter chartered by San Diego Gas & Electric Company to survey lines in Descanso was flying below the legal height limit on Wednesday, startling a horse that was injured as a result, says owner Rita Gallant.

Tim Garland, a ferrier who works for Garland, was shoeing horses on her property and called Gallant to report that horses were being spooked by the low-flying chopper.

“He said, `You’ve got this helicopter hovering above your property. It’s right at the top of your gate and your horses are going crazy,” Gallant told East County Magazine.  She added that Garland told her the helicopter was just 150 to 200 feet above the gate—close enough to get a good look at the pilot.  Anything under 1,000 feet would be illegal, according to the Federal Aviation Administration (FAA).

Later, Gallant said one horse that panicked and bolted was found with a gash on its side, which required suturing by a veterinarian. She told ECM that SDG&E has agreed to reimburse her for the veterinary bill.

Other Descanso residents also complained about the low-flying helicopter.  Gallant said her neighbor, Robin, also called her to ask what was going on at the property after seeing the unmarked gold and black helicopter flying back and forth repeatedly over Gallant’s property.

Peggy Martin told ECM that she, too, saw the helicopter and was worried that it could be a Border Patrol or Sheriff’s helicopter in pursuit of a suspect.  “It was worrisome,” said Martin, who adds that she called 911.  “This was right over our property for about 20 minutes.”

The 911 operator assured her that the helicopter did not belong to law enforcement and referred her to the FAA, but the FAA didn’t know who owned the helicopter or why it was there.

After walking with a friend, Martin learned that a horse had been injured and that the helicopter belonged to SDG&E. She then called Todd Voorhees, SDG&E representative to ask if the utility company could provide notice to area residents in the future, since additional flights are planned as the company continues surveying lines and poles for possible replacement.

“He said that would be difficult, due to weather and other conditions,” Martin says, adding, “I told him I don’t want to hear about `difficult’ when there are injuries and people are afraid.”

East County Magazine has asked SDG&E for comment on this incident.

If you see a helicopter that you believe is flying too low, authorities encourage you to take photos or video and then contact the FAA and in the case of a utility helicopter, the California Public Utilities Commission (CPUC).  The CPUC has imposed fines and grounded SDG&E helicopters in the past when they were found to be in violation of no-fly zones around eagle nests or other regulations.

Stay calm and document the aircraft's tail/ID numbers if possible. Make a note of the time of day, date and location. Contact the San Diego FSDO (Flight Standards District Office) Link: https://www.faa.gov/about/office_org/field_offices/fsdo/san/ Address: 8525 Gibbs Drive Suite 120 San Diego, California 92123 Phone: (858) 502-9882 Fax: (858) 502-9985 Office Hours: 7:30 a.m. to 4:00 p.m., Monday - Friday (Office hours by appointment only) There's a link to email the San Diego FSDO on the contact page. SDG&E isn't above flight standards and rules, especially in an airspace like ours that borders plenty of MOA/SUAs. Enough complaints will get FAA enforcement attention.
They continually and legally patrol the power lines that you don't want to fall and start fires. You can"t have your cake and eat it too
There are good reasons for the limits and clearly the FAA thinks they can patrol the power lines without going so low. Low-flying helicopters can cause fires, strike trees or buildings, spook livestock or wildlife, and cause annoyance to residents.