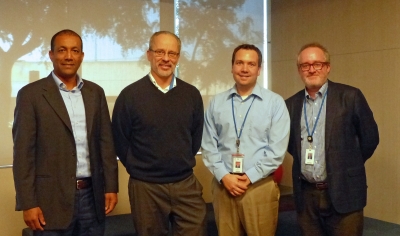 January 9, 2017 (San Diego) – In an exclusive interview with East County Magazine on Friday,  a team of SDG&E experts laid out their case for why they believe the California Public Utilities Commission (CPUC) should approve the utility’s request to recover $379 million for the remaining uninsured costs of the 2007 firestorms in San Diego County.

SDG&E estimates that if approved, its request would add $1.70 a month to the average residential customer’s utility bill over the next six years.  The amount could be reduced by extending it out over 10 years, said Hanan Eisenman, Communications Manager.

The CPUC will hold hearings today at 2 p.m. and 7 p.m.  at the California Center for the Arts Escondido conference center, Salon 1  Room, 340 North Escondido Blvd. in Escondido.

Cal Fire concluded that SDG&E lines were involved in three of the dozen or more fires in San Diego in October 2007:  The Witch, Guejito and Rice fires.   A Cox Cable line that rubbed against an SDG&E line was also implicated in the Guejito blaze.  A tree limb that fell onto a power line sparked the Rice Fire, while sparks from SDG&E equipment started the Witch fire, Cal Fire concluded.

In 2012,  SDG&E asked the CPUC  to establish a Wildfire Expense Balancing Account (WEBA) to track and recover costs of wildfires. The CPUC rejected a blanket request covering all fires, but did leave the door open for SDG&E to come back when actual costs of the 2007 firestorms were known.  Now that all but a handful of lawsuits over those fires have settled, SDG&E is back with a new proposal called Wildfire Expense Memorandum Account (WEMA) for the remaining money not paid in settlements and not covered by insurance.

Fire survivors and ratepayers argued in 2012 that they believe it is unfair to charge ratepayers for the fires and that shareholders of Sempra, SDG&E's pareent company, should bear those costs.

First, the utility contends that the fires were extreme acts of nature,  fueled by wind speeds higher than could reasonably be predicted.

Second, SDG&E notes that the company has invested heavily since 2007 in major upgrades to protect public safety,  including creating the world’s largest utility-owned weather station system,  fire-hardening thousands of poles, and providing an air crane helicopter seasonally that has helped fight multiple fires, preventing small blazes from growing out of control. 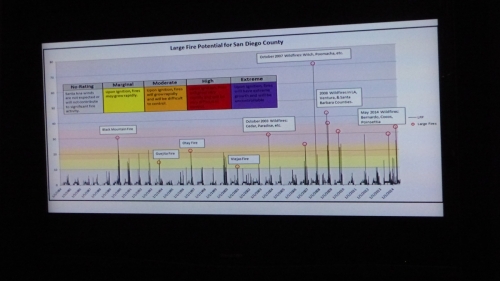 “At the Witch site, we believe winds were more than 90 miles per hour,” says meteorologist D’Agostino.  Lines were built to withstand winds up to 56 miles per hour.  He showed a chart indicated 90 miles per hour, if accurate, exceeded wind speeds measured in past local wildfires.

“In 2007, the wind strength was what we describe as a one in 100 years event. There might have been one other year this strong,”  the meteorologist adds. But that high wind came in the third year of October in a year when there hadn’t been rainfall  in years.   He likened it to Hurricane Katrina or Hurricane Sandy as a catastrophic and rare event.

It’s clear that high winds caused numerous fires across Southern California in October 2007.  It’s unclear whether any outside authorities estimated winds as high as 90 mph in the Witch fire.  A U.S. Forest Service report  indicated that the Paradise Fire back in 2003 had 70 mile an hour winds.  The Mussey Grade Road Alliance,  which represents fire survivors and opposes the rate increase, has contended that SDG&E weather data before 2007 suggested wind speeds over the 56 mph threshold were possible. (Click here for our earlier interview with MGRA’s Diane Conklin, with links to those data sources.)

It’s also clear, however, that SDG&E has made a determined effort to prevent such devastating fires from occurring here in the future.

Today, the utility is building its lines to withstand at least 85 mile an hour winds in all areas of San Diego County, and over 100 miles per hour in the most wind-prone areas.

The company has replaced 7,000 standard wood poles and 3,000 transformer poles with steel—a total of 10,000 poles changed out, protecting both its own equipment and the public.

“NOAA (The National Oceanographic and Atomospheric Administration) approached us,”  D’Agostino says.  “Threats from large fires are increasing.”  So the federal agency asked to create a video highlighting SDG&E’s successful efforts to create the world’s largest utility weather network.  “SDG&E invested in research to move fire science forward.  That model is expanding across the country,” he said.

SDG&E collaborated with the U.S. Forest Service and University of California, Los Angeles to move fire science forward and rate fire potential.   “Every circuit we operate in the backcountry got its own weather station.”

Today, other agencies including city, county, and federal review SDG&E’s weather data from stations on poles across the region to know what to expect and pre-position firefighting resources .

Woldermariam, SDG&E’s engineering expert, says that after the 2007 fires, the company leveraged its weather and fire science data to harden the grid infrastructure in the backcountry’s high risk areas and focus on public safety “so that any wind event would not take down a pole.”

Making the system more robust also includes a database with over 450,000 trees that are near power lines.  Annual inspections and identification of any safety systems that need repairs are also part of the protocol now, he says.  “We also have fire inspections more often in rural areas than in urban areas.”  There are cameras across the backcountry as well.

The sky crane helicopter is capable of carrying 250,000 gallons of water.  “IT allows us to knock down fires early,” says Woldermariam.  The massive chopper deploys at the request of Cal Fire, the U.S. Forest Service and City of San Diego, he adds.  Communications with customers on outages and when to expect restoration of power has also improved, he says.

The company also presages linemen out with its contracted fire crews “so we can respond at a moment’s notice,”  Eisenman says.

“Rather than having one standard for all areas, in areas with high wind pockets, we’re desigining to those wind speeds,” Woldermariam explains.

“We learned that Santa Ana winds work differently down here than in Los Angeles. We used to say the strongest winds are through passes and canyons. AT first we put weather stations there.”  But after learning that here we have down slope windstorms similar to those seen in Rocky Mountain areas, SDG&E began putting weather stations in those areas, too.

“We are looking at extremes right now. We are the global leader,” he adds.

SDG&E’s weather system is now being used as a model being implemented by a utility in Vermont.  Southern California Edison and Pacific Gas & Electric are also looking at implementing similar systems, D’Agostino says.  The public can view this weather data at www.SDGEweather.com.

Attorney Christopher Lyons says that under California law, utilities are strictly liable if their equipment is linked to property damage, even though there were firestorms statewide resulting from high winds. “The Witch Fire alone burned 197,000 acres,” he says.

“We settled almost all of the cases,” he adds, noting that only a handful remain.  “To do that, we ended up paying $24.6 billion in claims…We’ve now whittled that down to $379 million,  but really $421 million. We’re voluntarily giving up $42 million.”

The company is basing that 90/10 split with ratepayers absorbing the lion’s share on a CPUC approvain in the 1990s of a 90/10 ratepayer/shareholder split to cover hazardous waste cleanup, the attorney explains.

The company had “$1.1 billion in insurance in 2007. Asked how much insurance the company has now, he replied, “We had then, and now, all that we could buy.”  Insurance for wildfires has become harder to obtain, he noted.

The CPUC will use a “reasonableness” standard to determine whether or not to approve SDG&E’s request, including whether it operated its equipment in a reasonable manner.   “Our view is that damage is not due to anything we did, but to these extreme Santa Ana windstorms,” Lyons asserts.

The Witch Creek Fire was caused by two SDG&E powerlines coming together, with sparks igniting dry brush beneath, per Cal Fire.  But Lyons says the lines had been safely operating there since the ‘60s.

In the Rice Fire, a sycamore limb on a tree slated to be trimmed broke and blew onto a line. Opponents have contended that if SDG&E trimmed it earlier, the fire could have been prevented.  But Lyons says the limb in question wasn’t slated for pruning and had “hidden structural defects.”

In the Guejito Fire, a bundle of  Cox Cable’s fiberoptic cables bound by copper lashing attached to poles below a powerline broke.  A dangling wire blew up and hit SDG&E’s line. SDG&E settled with COX for an undisclosed amount, though Lyons says it didn’t fully cover SDG&E’s losses.

In addition to today’s hearings in Escondido, another hearing will be held in late January in San Francisco.   It is expected to last a week, with a decision likely by June,  Lyons says.  He adds that the case will focus in part on actions before the fires, and in part on the reasonableness of  actions after the fires including settlements.   In a nutshell, the question the CPUC must resolve is “Did we do enough to get to $379 million?” Lyons concludes.