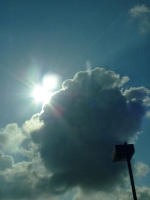 November 4, 2011 (San Diego's East County) -- Yesterday, ECM reported that some rural residents were left without power during a red flag alert, after receiving warnings from SDG&E that the utility might shut down power due to high fire-risk conditions.

Today, however, SDG&E has denied that power shut-offs impacting an esteimated 5,200 customers was intentional.

"SDG&E did not shut off the power," Stephanie Donovan, senior communications specialist, told ECM. "We were focused on restoring power to customers affected by the seven unplanned outages--three of which were weather-related, which could be the wind blowing a tree limb into a line, or simply slapping the lines together. The four outages that were not weather-related were due to a variety of things, including equipment problems, such as failure of an underground cable."