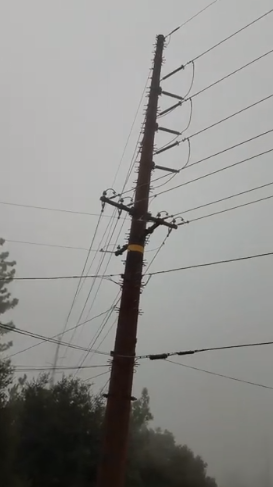 April 14, 2020 (Descanso) – SDG&E has shut-off power to 22 households in Descanso for 10 hours today in order to replace wood poles with steel for wildfire prevention. The action has sparked anger among residents under county orders to stay home due to the COVID-19 pandemic, with some left in the cold despite medical conditions, working and teaching children at home There are no shelters or any public space open, with temperatures forecast to dip to a chilly 42 degrees by this evening.

After ECM’s editor called SDG&E last night to advise the utility of  concerns raised by many residents online, the utility discovered it had mistakenly called many households who were not slated to have power shut down.  “They were all called shortly before 10 p.m. apologizing for this evening’s call, advising it was made by mistake,” SDG&E media spokesperson Zoraya Griffin informed ECM.

For those without power, however, the outage puts safety of medically vulnerable and elderly residents at risk, also causing major inconveniences for those working or teaching children at home.

Last night, Griffin stated that for the 22 impacted customers, “In addition to receiving advance notifications, our project team has been working very closely with them to support them in preparation for tomorrow’s outage.”

Some residents posted gratitude to ECM and other media for calling SDG&E last night.  “We had many people tonight making numerous calls to SDG&E AND news channels!!! IT worked. No power outage tomorrow,” said Judi Dugger, one of the residents mistakenly informed of an outage planned.

But ratepayers posting in the Descanso Neighbors forum continue to voice strong dissatisfaction, including errors even in the revised phone calls and a lack of support even for critical needs households.

“Our power went out at eight this morning,” Jill Janssen Kip wrote today. “We were called last night at 10:03 PM and told that our power would not be going out. This has caused extreme hardship in our household.” She mentioned one family member “in a lot of pain” because he could not access his reclining chair. “He had not been fed and portions of our power are out even with the generator, as we were NOT able to properly prepare for an outage," she stated.

Many residents voiced anger over the mere idea that SDG&E would go forward with shutting off power during cold weather amid a pandemic stay-home order, when residents cannot go stay with friends elsewhere, or take refuge in businesses now closed such as movie theaters, casinos and shopping centers, nor visit governmental facilities shut down such as community centers, senior centers and recreation centers.

Susan  Kyle Lancaster, who says she received no written notice prior to last night’s phone call, wrote “I cannot just go somewhere else” and objected to staying “in a cold dark house all day wit no phone, no internet, no cell service…in this pandemic this should not be happening.” She noted that their usual emergency shelter is a county library that is closed due to the pandemic.  “If they think they should put a bunch of seniors in that small space and have a virus outbreak which would be devastating, they are crazy.”

Judi Dugger objected to being let without heat.  “The generator will not heat this house and because of the virus we can’t leave.”

Descanso has suffered through dozens of planned outages in the past year or more, creating financial losses for some customers.   Lisa Lightfoot posted, “I just replaced the thir computer board for my refrigerator and the serviceman told me the problems are directly related to SSGE power shut-offs.”  Alma Almanza Penaloza replied, “Same with our refrigerator, also most likely due to al the power outages, we were told. Our refrigerator was bought new about 2 years ago; we paid a lot!!!”

Carol Chambers wrote, “Now they have us without power all day! We lost a freezer and generator with all these outages among other things” as well as “probably three hundreds dollars just in food.You’d think they would provide generators or wait for warmer weather Getting sick of SDGE!! My husband is 82 and I’m 74.  Can’t take much more, no where to go and no help from SDGE.”

Some residents said they were referred to Joe Mangione, the outage manager for the Mountain Empire area.

But Claudia D’Spain White stated,“My 91-year-old mother who lives alone just got the same call.” She said she called SDG&E’s outage coordinator “but all there is is voice mail and they have already gone home I have called this same person 5 times over previous issues. No one ever answers the phone and no one ever calls back! I wish I was rich and could get a lawyer and take these SOBs to court!  This has to be illegal!”

Some rural residents also object to visual blight created by the new poles, which are much larger than older wooden ones.

Not everyone objected to the shutdown and pole replacement in Descanso, however.

Trevor Royce Snapp observed,, “Aren’t they upgrading our infrastructure so when a fire comes through we aren’t without power for a week or a month?” He added, “With great sacrifice, comes great reward.”

As recently as March 30, the CPUC sent a letter to county officials across the state affirming that wildfire mitigation work is deemed critical and can continue.

ECM reached out to the CPUC to ask whether delays could be considered in cold weather.  A CPUC spokesman promised to look into the matter but has not notified ECM of any action.