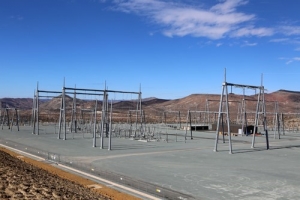 The entire project includes a new 58 acre state-of-the-art substation in the East County community of Jacumba, an upgraded substation in Boulevard and a 14-mile transmission line connecting the two substations. The ECO Substation project was designed to enhance electric reliability in the region and to help facilitate the delivery of renewable wind and solar energy to SDG&E customers.

“The ECO Substation project is a vital reliability addition to our local transmission system and will improve our service to our customers in the eastern part of our county.” said David L. Geier, vice president of electric transmission and system engineering for SDG&E. “This project will also help in meeting California’s aggressive renewable energy goals by facilitating the development of renewable energy in the region.”

The project drew controversy for using over 90 million gallons of water during construction – three times more than forecast. Environmentalists and some residents also objected to the massive grading and environmental disruption.

Construction required nearly 950,000 work hours. In the process, SDG&E  reports an impressive safety record given the scale of the project, 75 percent lower than the industry’s national average for similar construction projects.

This is nothing to be proud of. It's a disgrace. There are other forms of renewable energy that don't require expensive and destructive auxiliary infrastructure eyesores like this.
Another hideous blight on the landscape as more of our precious open back country is destroyed forever. And, to add insult to injury, all for not, since none of Sempra's (or, for that matter, California's, America's, or the rest of the developed world's!) "renewable" energy sources will lower by one iota the world increase in greenhouse gas emissions.