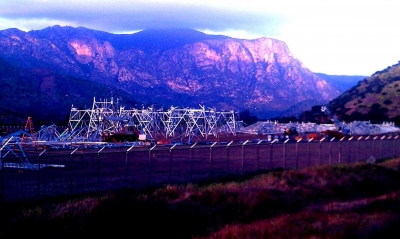 July 23, 2011 (Lakeside) – Back in February 2009, SDG&E officials met with a packed hall full of residents in Lakeside, including the town’s planning board. Residents were furious that SDG&E had changed its proposed route to march 40-story high voltage towers through El Monte Valley, a County-designated scenic view corridor.

After numerous residents objected to desecration of views, SDG&E representative Laura McDonald promised that towers would be “camouflaged” by painting them tan or green. This reporter was present and can vouch for that pledge made. Don Parent and at least two other SDG&E representatives were also present.

But now SDG&E has reneged on its promise to the people of Lakeside—and its representatives have apparently developed convenient cases of amnesia.

The company is moving forward with preparations to erect gleaming silver towers across the face of El Capitan Mountain (the local nickname for El Cajon Mountain, due to its resemblance to the spectacular landmark in Yosemite.)

“As you can see, these will be a blight across the face of El Cap Mountain,” said Milt Cyphert in an e-mail sent to East County Magazine. Cyphert, cofounder of the East County Community Action Coalition which has filed a lawsuit seeking to halt Powerlink construction, also included a photo which makes clear that the towers, awaiting installation in a fly yard at the base of El Capitan, stand out like a sea of sore thumbs—each casting glaring reflections of the setting sun.

SDG&E refused to respond to numerous calls and e-mails from East County Magazine asking why SDG&E has broken its word.

Instead, the utility responded by cutting ECM off its media list and accusing our publication of "bias" after we asked pointed question about not only the tower camouflage issue, but also why an SDG&E air crane was flying just days after dropping a 15,000 pound tower.

After a second tower was dropped and ECM sent an inquiry to the CPUC, the CPUC  issued a notice of violation to SDG&E for failing to inform the watchdog agency of the company's intent to let the air crane return to service. (The air crane has since been replaced.)

The utility eventually restored our access to media releases after ECM lodged a complaint with the CPUC and noted that SDG&E has been given opportunity for comment on all stories, though the utility has selectively dodged comment on many issues where wrongdoing by SDG&E has been alleged or proven.

ECM has won 33 journalism awards and editor Miriam Raftery, who witnessed the promises made at the February 2009 meeting, is a former Society of Professional Journalists board member in San Diego and a national Arlene Award recipient from the American Society of Journalists and Authors for community reporting that makes a positive difference.  She has also received honors for best investigative reporting, best of show and dozens of other honors from San Diego Press Club and other media professional organizations.

Which organization is more credible?  We'll leave that to readers and the CPUC to decide.

SDG&E, owned by Sempra Energy, previously paid a $1.2 million fine for failing to notify residents and planners in Lakeside that the Powerlink route had been changed to run through their community. Most Lakeside residents never even knew that the high voltage powerline had been proposed for their area until after the California Public Utilities Commission approved construction of the project. 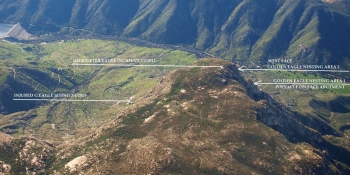 Later, an ECM investigation found SDG&E helicopters were violating no-fly zones around eagle nests in the El Monte Valley; federal regulators intervened to protect the eagles as a result of an ECM video by Billy Ortiz which clearly documented the violation.

So to Lakeside’s residents who love the pristine beauty of El Monte Valley, the shiny silver towers and SDG&E’s broken promise to camouflage towers that the vast majority of residents here never wanted at all now adds insult to injury.

On May 6, the Lakeside Community Planning Group sent a letter to CPUC Commissioner Billie Blancahrd, who oversees the Powerlink project, accusing SDG&E of violating requirements for visual mitigation on the project. They asked the CPUC to enforce mitigration requirements outlined in the Bureau of Land Management decision, which read: “…All structures and structural elements, that may be constructed as part of the project shall be designed, located, shaped, textured, colored and/or screened as necessary to minimize their visual contrast, blend, and complement the adjacent forest and community architectural character.”

But a CPUC letter signed by Vida Strong on behalf of Blanchard declined to take any action. CPUC claimed the mitigation measure applies only to U.S. Forest Service lands, not a County designated view corridor. Instead, the CPUC claimed, mitigation on public land allows the utility to “use dulled metal finish on transmission structures.” The CPUC letter took issue with the planning group’s characterization of the towers as a “bright shiny metallic” and instead cited SDG&E documents which claim the structures “have been specifically manufactured and will dull over time.”

Todd Voorhees with Sempra Utilities, in a letter to Cyphert, claimed the utility “did revisit this issue” after the community members asked why the towers hadn’t been painted as promised. “Unfortunately, we have concluded that the durability of the paint would chip and flake,” Voorhees now claimed in an e-mail sent May 22 to Cyphert. He also cited access issues and said the “light grey color that will dull quickly and blend more easily with the landscape and changing colors of the sky will require less ongoing maintenance.”

Cyphert told ECM that SDG&E representatives have denied making promises in the February 2009 meeting and says one company official responded, “You didn’t get that on videotape, did you?”

Clark responded that while painting towers would pose maintenance issues, “With that said, the towers can be painted to blend as agreed. Painting should be done prior to shipment so they are painted in a controlled environment to reduce chipping.” He added that it is not uncommon for steel structures and galvanized steel such as that used in generating plants to be painted to blend in with the environment. 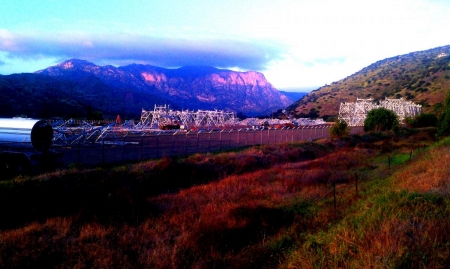 But SDG&E has already fabricated the towers in shiny silver, and apparently would rather outrage an entire town rather than incur the cost of having the towers painted to blend in better with the landscaping as clearly promised back in 2009.

The SDG&E fly yard being used to store towers awaiting installation, incidentally, belongs to Helix Water. Documents obtained by East County Magazine indicate that Helix did not want to allow SDG&E to use its property for the project, but was forced to do so after SDG&E sued the water district and threatened to use eminent domain. A settlement agreement that allowed SDG&E to lease the property “was a result of SDG&E suing Helix for the right to use the property for the Sun Rise Power Link Project,” confirmed Carlos Lugo, Director of Engineering at Helix Water, in an e–mail to Charlene Ayers at the Ranter’s Roost online discussion forum.

SDG&E’s response to the community concerns also faulted Lakeside’s planning group for not sending a letter officially requesting that the towers be painted to blend in with the landscaping.

But Lakeside Planning Group Member Laura Cyphert bristled at that suggestion. “We didn’t ask them not to paint the towers pink, either,” she said, adding that planners saw no need to make a request in writing for something that SDG&E had already promised would be done in a public meeting.

In that meeting, numerous residents made clear that shiny silver towers would be unacceptable.

Tom Medritz said lines should be undergrounded, adding, “This is like putting a powerline in Yosemite Valley and you are going to desecrate this, one of the most pristine areas in the County.”

Paul Sprecco said “the most objectional part is overhead lines in El Monte Valley.”
Many other audience members rose to speak against the visual blight of the towers obstructing views of El Capitan Mountain. Jody Morgan, a Cedar Fire survivor who lives at the base of El Capitan, noted that because of the County view corridor designation, “I had to prove I would not impact the view.” Morgan called “shiny towers” on his land “if not a sin…a crime against nature,” in that February 2009 meeting.

SDG&E’S Lauran McDonald promised all who spoke that the towers would “blend it.”

Company officials revealed an attitude of arrogant indifference to the community’s concerns, even then. Residents raised specific questions over other issues, such as how long it would take SDG&E to depower the lines in the event of another major wildfire.

The utility promised to come back for a future meeting with answers to the community’s questions. But SDG&E cancelled multiple future meetings. The company never came back to answer those serious concerns raised by Lakeside residents and planners. 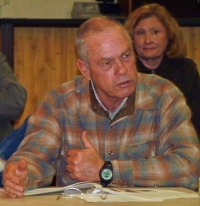 Robin Clee asked, “You decided to push this through Lakeside without telling us, and this is a done deal in your view…Our opinion on whether we want this in our community or not is completely irrevelant?” 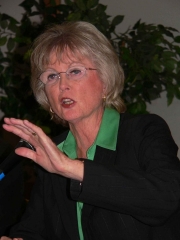 ied, “Pretty much,” drawing boos from the crowd back in February 2009.

This week, Supervisor Dianne Jacob expressed outrage over SDG&E’s treatment of Lakeside residents. “Ignoring the concerns of the people in Lakeside is yet another example of SDG&E putting their own interests first,” she wrote in an e-mail to East County Magazine, adding that the project should never have been approved. “Besides the fact that it is not needed and ripping off ratepayers, the devastating impacts of the Powerlink will permanently scar our backcountry landscape.”

Jacob voiced the opinions of many East County residents, adding, “There is a solution that will address the impacts to Lakeside and other communities—don’t build it!”