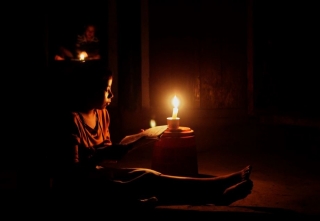 November 6, 2017 (Descanso) – Residents on the Descanso Neighbors Forum on Facebook have complained of prolonged power outages. On October 24th, Maggie Leavitt posted that power had been shut down for the seventh time in three weeks. She suggested the outages may have been intentional due to a red flag alert to prevent fires—and limit SDG&E’s liability.

East County Magazine reached out to SDG&E, which confirmed the outages but indicated most were not planned, offering detailed explanations for those that were activated during high fire risk, which the utility contends are meant to keep customers safe by seeking to prevent wind-driven power line fires.

Leavitt detailed the inconvenience and risk outages posed to herself and other residents.

““No phones today either, so cannot call out or in. Frustrating does not begin to describe it, not to mention that we cannot contact paramedics in the event of an emergency,” she wrote, adding, “No running water because we are all on wells which do not operate without power, no flushing either, no showers. No cooking unless you have a camp or propane stove Our generator wouldn't work either, finally got it running this afternoon, after we already lost most of the food in the fridge. Can't water the horse either, the generator can't handle the well pump draw.”

She also objected to what she views as impractical advice offered by the utility on how to get information during an outage. “They tell us to go online to check the power status, how ignorant are they that they do not know that computers don't work without power? And no cell phones so there is no 'mobile app' usage out here, as there are no cell towers. This is affecting many hundreds if not thousands of homes, many of whom have more problems than we are faced with, severe health issues requiring power for special medical equipment, etc.”

Allison Torres, communications manager, responded to ECM’s inquiry.  “At SDG&E, we are committed to providing our customers with safe and reliable power. We understand there is never a convenient time for an outage, and we appreciate our customer’s patience during those times, she said, adding, “Throughout the month of October, approximately 87 customers located north of Descanso did experience seven outages, however most of these were unplanned outages. In fact, on Oct. 5, a small animal made contact with our equipment, causing an outage, and on Oct. 10, a piece of electrical equipment failed which prompted a crew to safely make a repair that resolved the issue.”

Then during last week’s Red Flag Warning, SDG&E activated its Emergency Operations Center to prepare and respond to strong winds, hot temperatures and dry vegetation in several of the high fire-risk areas, including Descanso, Torres stated. She indicated the utility made efforts to advise customers prior to the planned outages.

“During these extreme fire conditions, SDG&E made every effort to proactively call customers in the affected areas a day before using an outbound dialer system to alert them of the weather conditions and possibility of power outages related to high winds,” Torres confirmed. “On Oct. 23, approximately 87 customers located north of Descanso were de-energized for safety in the morning hours and later that day were restored. As winds ramped up again that evening, lines were de-energized to protect public safety.”

She added that the outages were not widespread and that SDG&E crews were proactively staged in the area to quickly assess the lines to get the power back on once conditions improved.

Torres said that people who live in high fire risk areas are strongly encouraged to be prepared for fire season – and for emergencies in general.

“A power outage is possible at any time for many reasons,” she pointed out.  “Our main objective is to keep the public safe, and at rare times that means de-energizing power. In fact, during extreme fire conditions, we take steps to mitigate the additional risk to public safety that these conditions create in the communities we serve.”

Those steps include activating the utility’s Emergency Operations Center to monitor system conditions; consulting with in-house meteorologists who operate America’s largest utility-owned weather network with prediction models that provide valuable fire potential ratings, pre-staging SDG&E crews and contract firefighting crews in the areas where the winds are forecast to be the strongest.

The SDG&E representative concludes, “This is not about liability. This is about protecting the safety of people, homes, businesses, schools, parks and other property from the threat of wildfires. SDG&E employees call this community home too – it’s where we go to work, it’s where we send our kids to school, it’s where we volunteer our time to help others – we have a personal stake and take our obligation to protect public safety very seriously.”