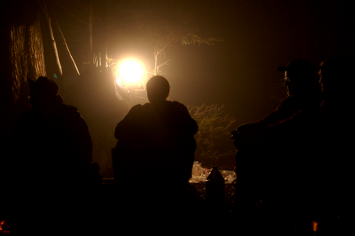 Residents angered at loss of water pumps, alarm systems, refrigeration, comunication and heat during outages up to a week in some areas that have suffered repeated outages

December 12, 2017 (San Diego’s East County) – SDG&E announced last night that it has fully restored power to all customers who were de-energized due to “public safety concerns” following a week-long red flag warning with strong gusty winds, low humidity and dangerous fire conditions.  An SDG&E media release states, “After crews inspected power lines all day in coordination with contract firefighters who were on hand to ensure a safe restoration process, power was turned on for all remaining customers. Field crews patrolled on the ground and in the air. Aerial inspections were completed by five helicopters in rural, mountainous areas."

Power remains out to 56 customers in the Lilac Fire zone in North County, where full restoration is expected early Tuesday evening. All 43 poles damaged in the fire will be replaced with fire-resistant steel poles and thicker, stronger wires, SDG&E indicates, adding, ““We understand that being without power, for any reason, is an inconvenience and we appreciate the patience we have received from our customers.”  For current information on outages and restoration times, visit sdge.com/outage.

Across East County,  many residents in rural, mountain and high desert towns have taken to social media to voice concerns over the prolonged outages.  Although SDG&E says it did provide advance notice to 170,000 customers of possible planned outages due to high winds and fire danger, before shutting off power to many thousands of homes, many rural residents say that’s not enough – and they want changes made. Below are highlights of residents' concerns and proposals.

Issues raised include lack of communications during outages that lasted a full week in some areas, losses due to food spoilage, spotty welfare checks that missed some with critical medical needs, and fears that if a wildfire had occurred while power was out, they would have been left with no way to pump water to stop fires and in areas without cell phone service, no means to even learn that a wildfire was encroaching.

Julie Salmons posted on the Descanso Neighbors forum that she’s seen two mind sets among backcountry residents. “I agree that having power cut is better than having fires spark (as in the 2007 firestorms, when the state concluded that power lines ignited dry brush)...I also agree that such a long outage is a hardship for many in a lot of ways.”

She wants to see SDG&E or the County conduct welfare checks on residents if an outage lasts more than a couple of days.  Her concern comes from personal experience, having known a couple who perished in the Border Fire and were found by community members—not officials--over a week later.

Several residents said they did receive welfare check calls from the County’s In-Home Support Services or from sDG&E. But for others, responses were unsatisfactory.

Chantelle San Nicolas says she called SDG&E after her power was shut off and told them her husband uses a medical machine and a property mate is on oxygen.  “Thank God the VA has been helping the property mate with oxygen but the response from SDG&E was `We will do our best to get service back on when it’s safe; no reimbursement will be made.'”

Tina Holley wrote that the County did do a welfare check at her home due to a medically fragile child with a feeding tube, but that check was not adequate.  “She asked why we didn’t answer our phones Thursday or Friday…Why didn’t you send anyone if you couldn’t get ahold of us?” (Her phone lines were also down due to the power outage.)

Johnny Jensen posted, “ATT landlines were down for part of this, and we don’t get cell service at home.” Internet access was also unavailable, leaving no way to communicate or receive emergency notices.

Karen Noblitt-McIntyre said Verizon has backup batteries on towers but AT&T does not, so AT&T cell phones did not work in Morena Village during the outage.

Tracey Martino raised a chilling question. “What if SDG&E shuts off the East County and a fire starts?  The fire hydrants we all installed and hooked into our water tanks are useless without electricity. Even with a generator hooked up to wells, will they last long enough for the firemen to get all the water they need to put out the fire? There has to be a better solution.”

Some were left without heat, if they relied on electric space heaters or portabel electric heaters. Temperatures dipped into the 40s in some mountain and rural towns during this mid-winter outage.

Residents also rely on electric well pumps to provide drinking water for people and livestock. Those without generators, which can be costly for low-income residents, were left with no way to supply water for horses, chickens and other animals absent help from neighbors.

Potrero resident Jan Hedlun, also an elected member of the Potrero Community Planning Group, told ECM in an e-mail that during intentional outages of more than several hours, she believes water trucks should be brought into impacted areas to assure that residents and animals have water.  “It should be mandatory if they are going to deprive us of service.”

SDG&E did bring trucks with water bottles and mobile charging stations for cell phones and other devices to several communities during the outage, but with power out, many residents did not get notification of this option, and it was only available in a limited number of locations.

Jennifer Rain Miller posted, “I don’t think the folks that were shut off for one day, or even two, quite grasp the dire life threatening situation a week or longer puts you in.” She observed that alarm system don’t work without electricity. “If dirtbags know your power is off, security systems don’t work. And many phones don’t work, either.  Shut off gen (generator) at night, get robbed o worse, can’t even call for help.”  Julie Salmons offered a partial fix for that issue, noting “Our security alarm has a backup battery.”

Some residents stocked up on ice or dry ice to try and preserve foods, which can work in short-term outages  But others suffered large financial losses as the outage dragged on for many days.

David Vikander posted that he lost a freezer filled with home-grown beef as well as grocery items, but he has no receipts to prove the losses. Salmon suggested he provide SDG&E a receipt for the animal he bought and the feed costs to raise it. Vikander indicated he’s taken pictures of the spoiled beef and hopes his loss claim with SDG&E will be paid.

Customers who had losses due to the intentional outages can submit claims to SDG&E by calling 1-800-411-SDG&E and receive a claim number. Claims will take 30-45 days to process in most cases, the utility has indicated.

Susan Jacobs voiced fears that SDG&E might reject responsibility for the intentional outages due to high winds. “If we get a lot of rejections, we need to notify [Supervisor] Dianne Jacobs,” she suggested.  Jill Michaels called for a town hall meeting with the Supervisor to discuss concerns.

Another beef voiced by residents was the lack of Red Cross emergency shelters. Only one was opened in East County for those with power outages,  a center in El Cajon that was more than an hour away from many impacted areas and not accessible at all on one day when I-8 was shut down east of Alpine due to high winds.

Nancy Bauler Satallante wrote on Facebook that she wanted to see a Red Cross emergency center in the rural area “so people can have a hot meal, etc.  Having this may people without power there needs to be more than ONE Red Cross Shelter,” she wrote. “Not everyone can get to El Cajon. The `need’ is out here in the backcountry!!”

Some also wanted to know why repairs to equipment in rural areas, some slated months ago, were delayed until the storm was due to hit. Others asked why the power restoration time kept changing, in some cases, being posted for days on end.  Extension of a red flag warning may account for the latter,  as well as repair crews diverted to fix downed lines in the Lilac Fire evacuation area in North County.

In some rural and mountain towns in East County, helped each other.  Bob Horne of Sherilton Valley wrote on the fifth day of the outage to thank a neighbor who stopped by to check up on him.  “Everybody in the valley is looking out for each other.”  But another neighbor posted that fear of approaching dark homes and having guns pointed at one might dissuade some from reaching out to neighbors.

A major concern voiced by many was the recent increase in the frequency and duration of outages, something many have suggested could be tied to a decision earlier this month by the California Public Utilities Commission which held that SDG&E cannot charge ratepayers for its uninsured losses from the 2007 firestorms. SDG&E has long denied that its equipment caused fires, blaming high winds and other factors, but the CPUC found that the utility failed to operate its equipment safely and Cal Fire found that the lines did cause three fires—the Witch, Guejito and Rice fires.

CPUC regulations allow utilities to shut off power when winds exceed capacity for which the systems were designed, leading some to ask why SDG&E doesn’t design systems in windy areas to withstand more severe conditions, rather than repeatedly inconvenience and arguably, endanger residents.

“Sustained power outages such as we are seeing have not happened before this year,” wrote Maggie Leavitt. She posted that her community has had 10 outages since September 30th. “Will they be turning off the power every time the wind blows? Summer? Winter? Fall, Spring?” the frustrated rural resident asks.

Katie Perkins Taylor suggested setting up a meeting or class for residents to learn how to be better prepared for the next outage occurs, a suggestion that met with approval from several others.

Some invested in emergency generators, battery or crank-operated radios, or had gone solar and off-grid to weather such emergencies.   Many more are now considering the latter as a permanent solution.

“I’m seriously looking into sending SDG&E a dear John letter and going off grid,” Miller concluded. “I think this situation they’ve created will push more people into `alternative’ energy sources more than ever.”

These days off the grid power using photovoltaic panels are a cost effective alternative to SDG&E line power. Batteries are getting better and cheaper. Otherwise, water well pumps can use the most power and a generator may be needed. A large water storage tank higher than the house allows water to flow by gravity without power. I use a small PV system dedicated to the well pump storing the water in a 10,000 gallon tank. No batteries needed storing the water instead of electricity in batteries.