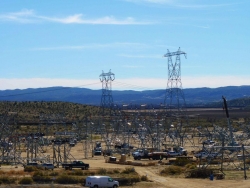 February 7, 2012 (San Diego’s East County) – San Diego Gas & Electric (SDG&E) has asked the County to authorize Sunday work on the Sunrise Powerlink project between February 19 and May 28 from  7 a.m. to 7 p.m. in or near the following locations: Lakeside’s San Vicente and el Capitan Reservoir, Jacumba, and Cleveland National Forest.   Those operations will include planned power outages in the impacted areas.

In addition, he noted, “Caltrans also requires that wire stringing operations across state highways take place early on Sunday mornings only.”  Working additional Sundays would also allow the utility to complete more of the project before spring nesting season for birds, Voorhees said.

The largest of SDG&E’s project helicopters, the Erickson air crane, would not be utilized for the Sunday work in an effort to mitigate the noise levels, Voorhees said.

The noise variance request has angered some East County residents and community leaders.

"This is a slap in the fact to the residents of East County!" write Alpine Communty Planner Lou Russo in a letter to Supervisor Dianne Jacob. "Need I remind you that SDG&E was given a variance to work seven days a week for six weeks to complete their helo ops in CLN [Cleveland National Forest]...and then got an extension past Dec 1st?  They have continued to fly outside the eagle nesting area since then (and, in fact, with in it)."

He added, "If they are unable to comply with their own schedule which they created, then it is time they pay the price with reduced profits...It is time for the County to deny this request."

“SDG&E’s additional noise waiver is unconscionable and should not be granted,” said Donna Tisdale, chair of the Boulevard Planning Group, adding that residents in her area have complained about flights directly over homes and corrals.  “SDG&E rarely keeps their promises or complies with flight paths or buffer zones for sensitive receptors—and they don’t admit their violations unless they are caught red-handed.”

Last week, SDG&E was found to have violated no-fly zones around eagle nests three times in January—not the first time such violations had occurred.  Two pilots were suspended  as a result, according to SDG&E.

SDG&E has previously been granted waivers for Sunday helicopter work in the Alpine and Lakeside areas, where residents repeatedly voiced complaints about seven-days-a-week of noise.  Tisdale indicated that’s not the only thing from which the utility company has obtained variances.

“The U.S. Forest Service has issued about 21 waivers allowing them to work in red flag weather” said Tisdale, who is concerned about fire danger in dry backcountry areas.

Normally I do not look over article on blogs, but I hunger to say that this write-up remarkably stilted me to go and do so! Your publication style has been amazed me. Thanks, totally satisfactory article.
health insurance california