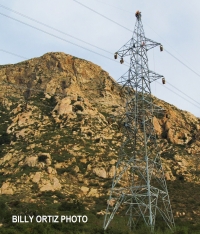 By Billy Ortiz and Miriam Raftery

The San Diego Union-Tribune reports that SDG&E has applied to federal and state regulators for a variance to extend flights by several days around eagle nests. But as of yesterday, flights near nesting sites remained halted or rerouted.

On November 30, contractors for SDG&E raced to complete as much work as possible on Sunrise Powerlink before the deadline kicked in, as documented in these photos.

For Lakeside residents, the sight brought sadness among many who have fought to preserve  the mountain from having the high-voltage towers erected on its face. Gone are the pristine views that drew many to the valley, which was designated as a county scenic view corridor--a designation that now seems meaningless. 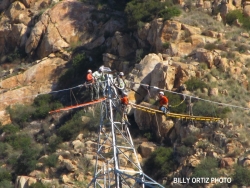 n Eagle is not on the endangered species list, but is on the protected list. Helicopters are being used to do the heavy lifting for the project, but the utility company had to discontinue its helicopter operations directly in front of an eagle nesting site on El Cajon Mountain (El Capitan) in Lakeside’s El Monte Valley. This is good for the eagles but bad for SDG&E , State and federal regulators placed Golden Eagle nesting areas off limits from December 1, 2011 through June 30, 2012.

On December 1, flights halted near an eagle nesting site in Lakeside as SDG&E complied with the no-fly zone requirements, flying east of the ridgeline as this video documents: http://youtu.be/SJjMF2Teing Work still continues with helicopters elsewhe 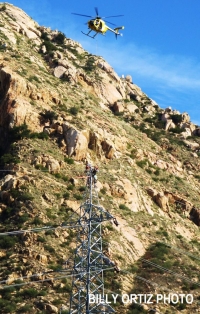 re in the area, however, with helicopter noise now impacting some communities in Blossom Valley.

SDG&E is behind schedule due in part to several groundings of its flights for safety concerns, including dropping large tower sections and heavy equipment, as well as violating an eagle nesting zone last spring, as ECM documented on video. After racing to string power lines between towers in the final hours before the deadline, the company now claims it needs a variance in part to install safety balls on lines required by federal authorities to assure that planes won’t strike the lines. 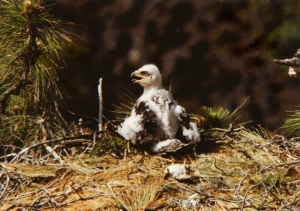 But some East County residents are objecting strenuously to any extension.

“Tell SDG&E no!” Alpine Planning Group member Lou Russo, who has endured seven-day-a-week helicopter noise from the project, wrote in an e-mail to officials. “They had plenty of time to finish this section, including pulling the balls up if they had put the proper assets toward finishing on time…Come back after the nesting season! SDGE acts like a child who pushes the limit ALL the time, and keeps getting the limit extended.”