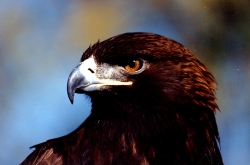 February 3, 2012 (San Diego’s East County)—Last April, SDG&E said it removed a pilot for flying too close to eagle nests in El Monte Valley, after ECM documented the violation on video and sent it to state regulators. Now it’s happened again.SDG&E has admitted to at least three new incursions into no-fly zones around golden eagle nests in the Bell Bluff area near Alpine and in Thing Valley, near Mount Laguna.

By law, SDG&E is required to keep its helicopters at least 4,000 feet away from eagle nests during nesting season.  The incursions occurred at Bell Bluff on January 24 and 26, measuring approximately 621 and 521 feet, and in Thing Valley on January27, measuring 161 feet. 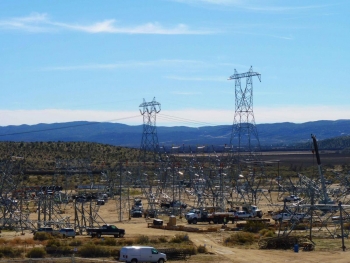 “There was no contact with any eagles.  In fact, both buffer intrusion areas contain inactive nests as confirmed during multiple surveys in 2011 and again January 30 and 31,” Cameron Durckel, public affairs manager of electric major projects at SDG&E stated in a letter to the Boulevard Community Planning Group regarding the Bell Bluff incidents.

The utility was also granted permission by the state to continue flights near the nests in Bell Bluff for three weeks past the traditional start of the golden eagle nesting season December 1.    Could the noise and disruption of numerous trucks and helicopters have dissuaded the birds from returning to their nesting sites?  Eagles mate for life and traditionally return to the same nests year after year.

Durckel notes that Sunrise Powerlink is the first transmission project to adopt GPS technologies to track helicopter activities near eagle buffer zones, surpassing past measures. In addition, new measures are being adopted including expanding the no-fly radius to 4,200 feet and implementing a restricted radius between 4,200 and 6,000 feet that will require a work stoppage and additional observer  to assist in navigation.

But some say that’s not enough.

“What about buffer zones and incursions in the active eagles nesting areas in the Tule Mountain and Table Mountain areas, that are showni n the Tule Wind documents, where Sunrise choppers are seen working daily?” asked Donna Tisdale, chair of the Boulevard Planning Group, who witnessed the incursion in Thing Valley.  In McCain Valley, near the Tule Mountain nesting area, 30 helicopters have been working, along with 600 workers, she said.

Some nests may not be marked on SDG&E’s maps, Tisdale noted, adding that maps are unclear.  “Golden eagles have also been spotted regularly in Jacumba, Boulevard, Tierra Del Sol, Crestwood, La Posta and Millar Valley areas.  Bankhead Springs has historic nesting areas both north and south of Historic 80 that don’t show on any maps.”  Mark Ostrander, chair of the Jacumba Sponsor group, saw a golden eagle on Historic 80 this week.

Tisdale has also stated that Sunrise workers have told her that a golden eagle was struck and killed last year by an SDG&E helicopter between Jacumba and Bankhead Springs, an eagle foraging and nesting area. 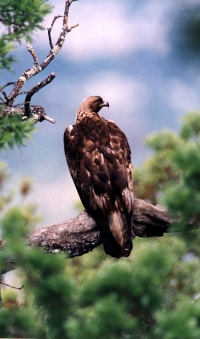 Alpine Planning Group member Lou Russo, who lives in Bell Bluff and has fought repeatedly to get the helicopter activity halted around the eagle nests, asked why fines were not imposed.

But Fritts Golden with Aspen Environmental Group, consultant on the project, replied, “There is no fine schedule associated with mitigation measures.”  Additional measures are eing studied by regulators, including the possible use of audible or visual warning signals when aircraft nears a buffer.

ECM contacted the U.S. Fish and Wildlife Service for comment. “Currently, the U.S. Fish and Wildlife Service does not have any indication that the three unintentional intrusions from helicopters caused a direct injury to any golden eagles,” said Jane Hendron, public affairs division chief for the USFS in Carlsbad. “We are in communication with SDG&E, CPUC, and the U.S. Forest Service to identify whether additional steps may be needed to help prevent any further incursions into golden eagle buffer zones.”

East County has only 48 known pairs of nesting golden eagles, and a handful of bald eagle nesting pairs.  Loss of even a single bird can have a long-lasting impact on a small population, and disruption of nests can lead birds to abandon their nests.

Saw one of the Goldens while hiking the El Capitan Open Space Preserve a couple weeks ago. He was hunting on the north side of El Cajon mountain, (aka, El Capitan) and I had to wonder if maybe that was due to the incessant helicopter traffic and noise on the south (El Monte Valley) side.

I heard this "no fly zone" story this morning on the news and as a private pilot it caught my ear... I routinely fly the back country in my bush plane and wondered why i hadn't heard of a "no fly zone" from the FAA or any other pilot... I started by googling and reading stories since I was concerned that I might inadvertantly fly into one of these zones and be hit with a violation... After Numerous phone calls to the FAA and finally to the sheriff aviation unit I finally got an answer.... THe FAA, who regulates air operations, knew nothing of any no fly zones and advised me not to worry about it but since I fly into and land in the back country at various dirt strips and dry lakes I wasn't satisfied with"don't worry about it".... A call to the sheriffs aviation squadron answered my concerns. There is no no fly zone prohibiting me from flying as I do wherever I have flown in the past and that includes the eagle protection areas, so to speak,. It seems all this concern is with helicopters and the oposition to the power link.... hence , it's a political issue... So I'll continue to fly where I like when I like in keeping with FAA regulations and safe flying practices... end of story....