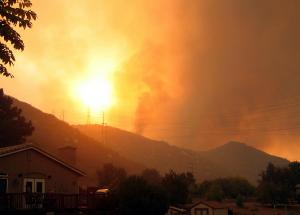 Lee Schavrien, chief administrative officer for SDG&E, states, “We have gone to great lengths to minimize the impact to our customers by successfully settling these lawsuits rather than taking them to trial, which would have been significantly more costly.”

At least one case remains unsettled, by a plaintiff who say she wants to take her case  to trial and have evidence admitted in a publicly accessible records.  Dr. Christine Ross has advised ECM that she is currently seeking new legal counsel  to represent her at trial. Ross, a veterinarian, contends that the fires were caused by a  dangerous design flaw in SDG&E lines that has not been corrected. She wants to have an expert witness, Ed Clark, present testimony in court. Clark is the author of Circle the Wagons SDG&E: The Perfect Corporate Cover-Up.

Clark is an electrical installation expert who formerly worked for a major utility company and has been hired as an expert witness by SDG&E in the past. SDG&E has repeatedly denied his allegations.

SDG&E contends it has taken steps to improve safety including installing over 170 weather stations, the largest and most concentrated weather network in the nation, SDG&E states in a press release.  Each circuit in high-risk fire threat zones in the backcountry has at least one weather station to provide wind speed, temperature and humidity every 10 minutes to evaluate impact of weather on system operation.

Steve Vanderburg, senior meteorologist for the utility company, says Santa Ana winds in 2007 near where the Witch Creek fire started were blowing at “more than 90 miles per hour—that’s almost as strong as a Category 2 hurricane.”

A CPUC investigation faulted SDG&E lines, along with Cox Cable, for causing some of the most devastating 2007 wildfires although the company has never admitted fault.  SDG&E notes that other factors beyond its control, notably the Santa Ana winds, also played a “major role” in the ignition and spread of the fires.

The CPUC is expected to make a final decision on the proposal in the first quarter of 2017.

Attorney Mike Aguirre has sent a public records request to the CPUC asking for all correspondence with SDG&E and its officials regarding passing along costs of the 2007 wildfires to ratepayers.

The 2007 fires killed two people and destroyed over 1,300 homes, sparking evacuation of a half million people and burning hundreds of thousands of acres across our region.

I don't think so. The Sempra stock price has escalated from $54 to $94 in the last five years, as seen here.