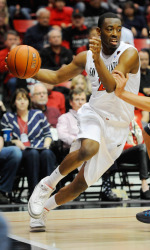 February 13, 2014 (San Diego Xavier Thames, senior guard for the San Diego State University Aztecs,, is among 30 NCAA Division I men's basketball players up for the 2013-14 Naismith Trophy presented by AT&T, the Atlanta Tipoff Club has announced.

Naismith is one of two players representing schools from California and the Mountain West division.  Thames' midseason player-of-the-year candidacy is his second after being named to the Oscar Robertson Trophy Watch List last month.

Twice named national player of the week, Naismith leads the Aztecs in scoring (17.9), assists (2.7), steals (1.7), three-point field-goal percentage (.410), three-point field goals (43) and free-throw percentage (.833). Earlier this week, he was also selected as MW Player of the Week after helping lead the Aztecs to victory at Boise State and in Nevada.

Thames is the second Aztec in as many seasons and third since 2011 to appear on the Naismith Midseason Top-30 List.

The Aztecs  host Air Force at SDSU’sViejas Arena on Saturday at 5:05 p.m.. The game will be broadcast nationally on the CBS Sports Network.