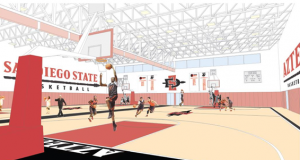 Aztecs announce plans for a 23,500-square-foot facility for men’s and women’s basketball.

November 14, 2013 (San Diego) -- San Diego State University President Elliot Hirshman and Athletic Director Jim Sterk announced Tuesday that plans for a 23,500-square-foot Basketball Performance Center are in design, with a plan to break ground on the project in late spring 2014.

Although a majority of the funds have been pledged, fundraising continues for the project, which is tentatively scheduled to be completed in 2015.

“This is an exciting day to be able to announce this project is moving forward,” Sterk said. “It is a project that will greatly benefit our already successful men’s and women’s basketball programs. It is also an important day because we are going public with our drive to raise funds for the project and hope that the community that has enjoyed SDSU basketball will get behind this project.”

The seven-time Mountain West champion men’s basketball program has been to the NCAA tournament a school-record four consecutive seasons. The Aztecs have posted eight straight seasons with 20 or more victories, advancing to postseason play in each of those campaigns. SDSU is one of 10 schools in the country that has gone to the last four NCAA tournaments and won at least 23 games in each of those seasons.

“We have received tremendous support from President Elliot Hirshman and Jim Sterk on making this dream a reality,” Aztec men’s basketball head coach Steve Fisher said. “This has been a priority for the basketball programs for some time and will help both basketball programs immensely. This will be another showcase facility for the athletic department as well as the university as a whole.”

The women’s basketball team has won five Mountain West championships and advanced to postseason play in four of the past five seasons. Last year, San Diego State won a program-record 27 games, compiling a 17-game winning streak during the season en route to claiming the league’s regular-season championship for the second straight year.

“The basketball performance center is more than just a building, it is our classroom,” SDSU women’s basketball head coach Stacie Terry said. “The facility will provide an opportunity for our student-athletes to enhance their individual games, which will in turn benefit our program. It also keeps San Diego State competing at the highest level, not only in basketball, but in recruiting as well.”

For more information on the Basketball Performance Center, contact the Aztec Club at (619) 594-6444.