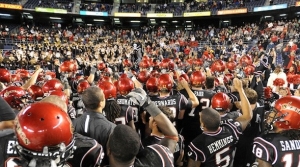 December 7, 2014 (San Diego) – When the Poinsettia Bowl kicks off at Qualcomm Stadium in San Diego on December 23rd, the San Diego State Aztecs will be making the team’s fifth consecutive bowl appearance.  This year, the Aztecs will be playing the Navy.

The odds look good for SDSU, since the Aztecs have beaten the Navy all three times that the two teams have squared off in the past, and the Aztecs are enjoying a strong season this year.