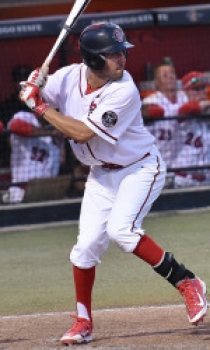 Photo:  Andrew Brown had three hits, two RBI and scored once in the win over Pacific Sunday afternoon.  Courtesy goaztecs.com

The win was highlighted by the fine pitching performance of Aztec starter Dominic Purpura (1-0), who went six innings allowing no runs on three hits with no walks and six strikeouts as he tied his SDSU career best in the latter category. Relievers Ray Lambert, Hayden Petrovick and Jacob Erickson also tossed one shutout inning each to cap off an excellent afternoon for the San Diego State pitching staff.

This time, a one-out single by Andrew Martinez was followed by an RBI double off the bat of Tyler Adkison, making his first plate appearance of the 2017 season. An ensuing single by Dean Nevarez plated Adkison before David Hensley’s double put runners at second and third. A walk to Alan Trejo loaded the baes and sent UOP starter Rick Reynoso to the showers.

Andrew Brown then greeted Tiger reliever Cooper Casad with a two-run single to left on his first pitch before Danny Sheehan capped off the scoring in the inning with another single to left field. Reynoso would be charged for SDSU’s six runs (five earned) in the first two frames and would take the loss to fall to 0-1.

After making it a 7-0 contest with an unearned run in the third, Martinez added three more in the next inning courtesy of a three-run home to deep left that scored Sheehan and Jordan Verdon ahead of him. Verdon would drive in SDSU’s final run with a two-out RBI single through the right side in the bottom of the eighth.

Up next for San Diego State is the short road tip north to face UC Irvine on Tuesday, Feb. 21, at 6:00 p.m. at Anteater Ballpark.