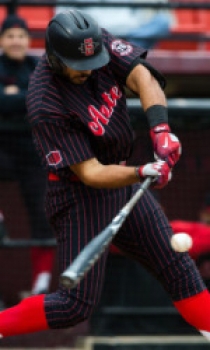 Photo:  Andrew Martinez had four hits including a pair of doubles over the first two games vs. Pacific.  Courtesy goaztecs.com

February 18, 2017 (San Diego) - Right after the completion of Friday's rain-delayed opening day game, which the Aztecs won 11-5, both teams took the field again for game two.  This time, Pacific had the upper hand as they beat the Aztecs 5-1.

Pacific came out swinging against SDSU starter Harrison Pyatt, scoring three runs in the opening frame and one each in the second and third to account for their run production in the game.

Pyatt, who would eventually take the loss, went a total of 5.0 innings allowing the five runs on five hits with three walks and five strikeouts. Two of his walks and a hit batter proved costly as each would go on to score a run.

Lydon, meanwhile, kept the Aztecs frustrated as they were able to put at least one man on base in eight of the nine innings, but would eventually finish with 12 left on base. The right-hander went 6.2 innings, scattering seven hits with a walk and four strikeouts. Reliever Vince Arobio tossed the final 2.1 frames giving up just a lone since in the ninth.

Martinez was the lone Aztec with more than one hit (single, double) in the game as he finished 4-for-7 with two doubles and an RBI over the two contests. His hit total was matched by teammate Alan Trejo while Sheehan’s three RBI led the squad over the two games.

San Diego State and Pacific will play the rubber match of their weekend series on Sunday (Feb. 19) with a contest scheduled to get underway at 1:00 p.m. at Tony Gwynn Stadium.