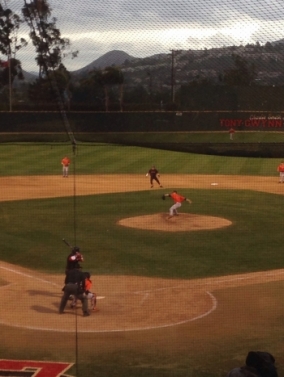 The Tigers wasted no time.  After getting two quick outs, Seeburger gave up a solo home run to senior right fielder Danny Mayer and Pacific took an early 1-0 lead.

The Aztecs came right back in the second.  After a crucial monster triple by sophomore first baseman Jordan Verdon, senior designated hitter Andrew Martinez hit the sac groundout to bring him home and tie the game at one.  Junior center fielder Denz’l Chapman and junior second baseman Alan Trejo each hit RBI doubles to make the score 3-1.  Senior shortstop Danny Sheehan put the cherry on top of a huge inning with a two-RBI single and the Aztecs led 5-1 after two. 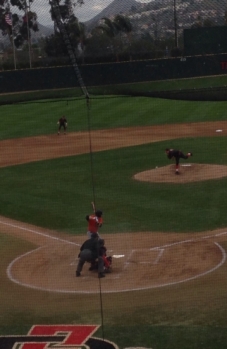 But in their half of the fifth, the Aztecs added some insurance when Verdon hit a sac line out to right to drive home junior right fielder Chase Calabuig and SDSU went up 6-4.

After the Tigers brought in junior right hander Justin Giovannoni to pitch in the sixth, senior third baseman Andrew Brown welcomed him with a solo blast to left field to put the Aztecs up 7-4.

In the seventh, freshman Julian Escobedo pinch hit and did his part and hit a sac fly that drove in two runs, increasing the Aztecs’ lead to 9-4.

Thanks to rain, the last two and a third innings of this game finished today.  In the bottom of the eighth, the Aztecs added two runs on a sac fly by Verdon and an error by Pacific. 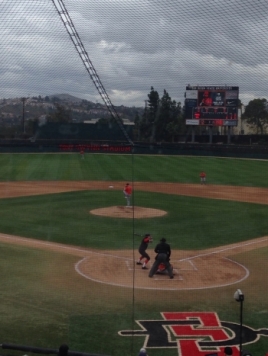 In the ninth, Pacific scored a mercy run, but SDSU won their stunted season opener 11-5.  Seeburger tossed six strikeouts in his first start of the season.

A recap of game two, which was also played today, will be posted shortly.