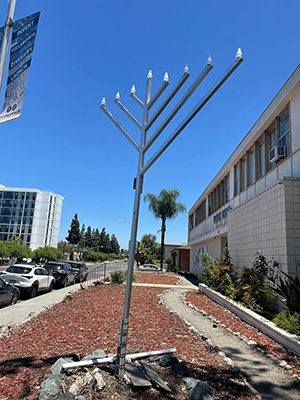 June 29, 2021 (SAN DIEGO)  For the second time this year, the Chabad House at San Diego State University has been subjected to hostility — this time in the form of a broken branch of its large outdoor menorah and the ripping of one of its banners.  Last month, youngsters burglarized the combination synagogue and residence hall while students upstairs were asleep.

It was the second time that the large menorah was broken.  In March 2017, it was partially destroyed when students used it one night to do pull-ups.

In the case of the burglary and the previous menorah incident, Chabad Rabbi Chalom Boudjnah met with the perpetrators (after they were identified), lectured them on the danger their actions posed, asked them to perform community service, and then declined to press charges against them.

Rabbi Boudjnah could not be reached for immediate comment concerning whether he plans to follow the same course of action in this case, which occurred on Friday, June 25. 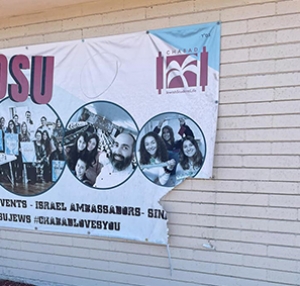 However, on his Facebook page, Boudjnah wrote: “Our menorah was vandalized (and) our banner destroyed in a cowardly antisemitic act.  The students are helping raise money to rebuild it and it’s really heartwarming to have them come together for us and for the house they call a home away from home, the Chabad House.”   In another post, he wrote: “Antisemitism once again on display. Chabad House was vandalized; it’s sad; it’s hurtful.  But our mission to stand for Jewish  pride and love for all will not be diminished but on the contrary it will continue to increase.  We will need to replace the banner and menorah, if you want to contribute in support of Chabad House and Jewish life at SDSU you can make a donation here.”

In response to the latest incident Prof Risa Levitt, Ph.D., director of SDSU’s Jewish Studies Program, commented, “We are working closely with senior administration on campus to continue to promote the safety and protection of our Jewish faculty, staff and students.”

SDSU President Adela de la Torre, who has had to contend not only with attacks on Chabad but also antisemitic graffiti daubed on an off-campus residence hall earlier this year,  said she wanted members of the Jewish community to know “We are with you in anger, but urge you not to allow this incident to make you question your place at SDSU.  We are committed to you and to fostering a welcome and inclusive environment for our Jewish students, faculty, staff, and local community partners.”

De la Torre added in her letter, “Immediately after learning about the vandalism, many on campus took action to include the following: meeting with Rabbi Chalom Boudjnah to extend support; University Police Department officers initiated an investigation; community members were connected to support services, including counseling and psychological support and ways to report bias-related incidents.  The University Police Department is reviewing video footage and is asking anyone with details to report information to the department by calling 619-594-4636, or emailing policeinvestigations@sdsu.edu.  Please reference Case #21-393.”

The SDSU president said the university’s Presidential Task Force on Addressing Antisemitism was quickly convened to consider the case in light of its mandate to develop programs, policies, courses and response efforts to actively address antisemitism.  She noted that among the task force’s charges is to develop a “special topics course in the Jewish Studies Program related to antisemitism in America.”  Task force members are organizing a teach-in to be held in July, she added.

Donald H. Harrison is editor of San Diego Jewish World.  He may be contacted via donald.harrison@sdjewishworld.com