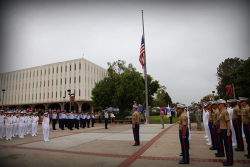 ROTC led the ceremony, which included brief remarks, lowering the American flag to half-mast and a moment of silence.

“These acts shattered airplanes, buildings and the lives of nearly 3,000 victims and their families, but they failed to shatter America’s courage and character,” he said.  “Today the SDSU community remembers the tragic events of that day and the amazing, heroic actions of the first responders.”

“We journeyed through a dark valley, but your light has led us to a place of hope,” he intoned.  “You have turned our grief into determination.  We are resolved to do what is good, and right, and just.”