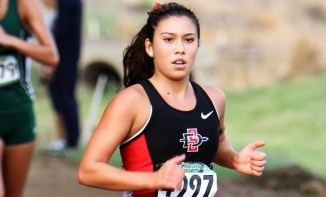 July 18, 2018 (San Diego) - San Diego State has announced their 2018 cross-country schedule. The Aztecs will compete in five regular season meets, four of which will be in California, before hosting the Mountain West Championships October 27.

The 2018 season gets underway at the Mark Covert Classic, hosted by Cal State Fullerton, September 1 at Carbon Canyon Regional Park in Brea, Calif.

Two weeks later, the Aztecs will compete at the 38th annual Riverside Invitational, the first of their two races at the UC Riverside Agricultural Operations Course.

On September 30th, the Aztecs will race in the Capital Cross Challenge at the Haggin Oaks Golf Complex in Sacramento, the site of the NCAA West Region Championships.

Two weeks later on October 13, the Aztecs will split up, with half the team going back to Riverside for the Highlander Invitational. SDSU will also send runners to Verona, Wisconsin for the Wisconsin Pre-Nationals, held on the same course as the NCAA Championships.

The 2018 NCAA Championships are hosted by the University of Wisconsin and will take place at the Zimmer Championship Course in Verona, Wisc. on November 17.