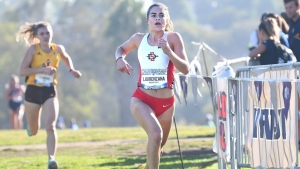 October 26, 2018 (San Diego) - The San Diego State cross country competed at the Mountain West cross country championships Friday morning at Morley Field in Balboa Park. The Aztecs finished in tenth place out of 11 teams and were led by Renee Laurenzana.

Eight of the nine Aztecs runners were freshmen and they were without one of their top runners, Carlene Masar, who sat out due to injury.

“I’m proud of the team and their effort today,” Coach Robert Lusitana said after the race. “This is the first collegiate championship race for the majority of them and we have one of the toughest cross country conferences in the nation. They are a young team that is still learning, and this race was a valuable experience for them.”

Racing on a challenging and hilly course, Renee Laurenzana paced the Aztecs with a time of 23:16.0, good for 59th place. She became the fifth different Aztec runner to be the team’s top finisher.

“Our team has incredible depth.” Lusitana explained. “Our spread has been small all year long, which is a good sign for the future. Most of our freshmen are running much faster than they did in high school, which is encouraging.”

Behind Laurenzana was Marissa D’Atri who was leading the Aztecs for much of the race. She finished in 66th place (23:34.8).

Up next for the Aztecs is the NCAA West Regionals in two weeks.

“Regionals is the most important race of the year, so we will begin tapering off our workouts as that approaches,” Lusitana said.

“I thought for what we had, we competed well and I’m proud of their effort. Caitlyn Couch wasn’t 100 percent and Carlene Masar couldn’t run, that’s two of our top five runners.” Coach Robert Lusitana

The Aztecs have had a different top finisher in all five of their races.

The Aztecs will run in the NCAA West Region Champions on November 9 in Sacramento, Calif. at Haggin Oaks Golf Course. The meet will be streamed by FloSports (subscription required).