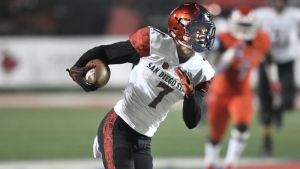 November 17, 2018 (Fresno) - San Diego State limited Fresno State's high-powered offense to 390 yards and 23 points, but the Aztecs were unable to capitalize on two drives inside the Bulldog 30-yard line in a 23-14 loss Saturday night.

With the victory, Fresno State won the Mountain West West Division title. The Aztecs and Bulldogs are the only two division teams to claim the title since the Mountain West went to the two division format.
San Diego State led 14-10 at intermission. Ronnie Rivers had 22 carries for 78 yards, including a two-yard touchdown that gave Fresno State the lead for good.
Marcus McMaryion hit KeeSean Johnson for a 32-yard gain to the 18 to set up Rivers' TD run that capped an eight-play, 75-yard drive to open the second have and give the Bulldogs a 17-14 lead.
The teams traded punts before San Diego State missed a 47-yard field-goal attempt and, on the ensuing possession, McMaryion ran 13 yards on 3rd-and-4 and then, on third-and-12, hit Johnson for a 37-yard gain to the two. Two plays later, Jordan Mims scored on a one-yard run and the Bulldogs led 23-14 with 12:40 to play after the PAT was blocked.

The Aztecs offense didn't cross midfield the rest of the way.

Fred Trevillion had four receptions for 189 yards and two touchdowns for SDSU.