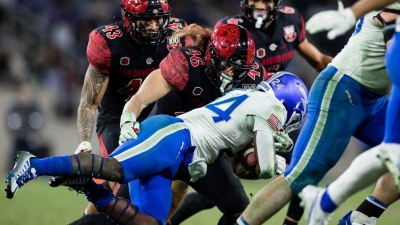 With the loss, SDSU also saw its nine-game victory streak against the Falcons halted, slipping to 7-5 on the year and 5-3 in Mountain West play.

Conversely, Air Force (9-3, 5-3 MW) limited the Aztecs to minus-1 yard rushing and eight first downs for the game while posting two fourth quarter interceptions in the end zone to dash any hopes of an Aztec comeback.
The Falcons, who completed just one of two passes, gained 271 of their 285 total yards on the ground and nearly doubled the time of possession (39:13 to 20:47) to secure the win.
SDSU found itself in pursuit mode for the entire game after Air Force fullback Brad Roberts broke free up the middle for 63 yards to the Aztec 6 on the second play of the game. Three snaps later, Roberts plowed into the end zone, giving the Falcons a 7-0 lead they would not relinquish.
San Diego State responded with a 7-play, 45-yard drive on its first possession, highlighted by Jalen Mayden's 28-yard completion to Mark Redman to the Air Force 28. However, the Scarlet and Black came up empty when West Hills alum Jack Browning misfired on a 45-yard field goal attempt, setting an ominous tone for the remainder of the contest.
In the early moments of the second quarter, the Falcons marched to the SDSU 2, aided by two 15-yard penalties, including a face mask infraction that negated a seven-yard sack on a 3rd-and-6 situation from the Air Force 49. Three plays later, the Aztecs were flagged for a targeting penalty after the Falcons' DeAndre Hughes was stopped short of a first down following a seven-yard run on 3rd and 13.
With their backs against the wall, the SDSU defense came up big and stuffed Roberts on consecutive rushes up the middle.
Following an exchange of punts on the next three possessions, the Falcons drove to the Aztec 40 with three seconds left in the half, but a 57-yard attempt by Matthew Dapore fell short.
After mustering just three first downs and 76 total yards in the first half, the Aztecs looked to reverse their offensive woes coming out of the locker room. However, those plans were short-circuited when Mayden fumbled on the second play of the third quarter and Payton Zdroik recovered at the SDSU 14.
Moments later, the Aztec defense managed to minimize the damage, limiting the Falcons to just one yard on the next three plays, as the visitors ultimately settled for Dapore's 30-yard field goal, extending their advantage to 10-0.
Needing a quick response, Jordan Byrd gave the host school a huge boost with a 37-yard kickoff return to the SDSU 45, while a personal foul penalty tacked on an additional 15 yards, giving the Aztecs a short field to work with at the Air Force 40.
Shortly thereafter, SDSU picked up a pair of first downs on Mayden's 15-yard completion to Tyrell Shavers followed by a 13-yard connection to Jesse Matthews. However, the drive stalled, and Browning was summoned to salvage three points on a field goal from 26 yards out, trimming the margin to 10-3.
The score remained unchanged until the 9:03 mark of the fourth quarter when the Falcons made it a two-possession game once again on Dapore's 32-yard field goal, capping an 11-play, 54-yard march. Roberts accounted for all but four of those yards on the ground himself, including a key 22-yard burst on 3rd and 1 from the Air Force 40.
Trailing 13-3 after another exchange of punts, the Aztecs set up shop on the Falcon 47 and advanced to the 6, as Mayden hooked up with Brionne Penny on a 16-yard completion before connecting with Chance Bell on a 13-yard.
However, two false start penalties sandwiched around a pair of incompletions derailed the Aztec momentum. Facing a 3rd and goal from the 16, Mayden lofted an ill-advised pass over the middle, as Jayden Goodwin picked off the ball in the end zone to extinguish the threat.
SDSU had one last chance with under two minutes to play, as Mayden completed a 40-yard pass to Penny on 4th and 4, while a five-yard sideline interference penalty by Air Force on the play gave the Scarlet and Black a first down at the 20.
Two plays later, however, Trey Taylor cut in front of Shavers in the end zone for another interception to end the Aztecs' frustrating night.
Mayden finished with 188 yards on 16-of-32 passing with two picks, while Matthews totaled four catches for 29 yards, becoming the 14th player in SDSU history with over 2,000 career receiving yards.
Defensively, the Aztecs were led by Helix alum Michael Shawcroft and Jonah Tavai, who set collegiate bests with 12 tackles apiece. Shawcroft came up with nine solo stops and had two tackles for loss, including a sack.
On the flip side, Roberts gained 187 yards on the ground for the Falcons, while John Lee Eldridge III had 53 rushing yards of his own.
San Diego State, which is bowl eligible for the 13th consecutive campaign, will await its postseason destination when bowl game selections are announced on Sunday, Dec. 4.
Box
Postgame quotes
Postgame notes