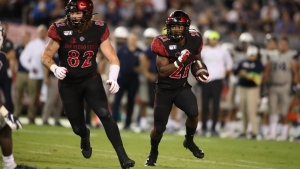 After the Aztecs scored a field goal on their opening possession, the Aggies responded with 23 unanswered points to take a 20-point lead early in the third quarter. SDSU quarterback Ryan Agnew threw a pair of fourth quarter touchdown passes to bring the Aztecs within six points with 5:19 remaining.

Following a missed Aggie field goal, SDSU got the ball back with 1:18 left but turned the ball over on downs.
Agnew finished the game 20-for-37 with 281 yards and two touchdowns.  Kobe Smith was Agnew's favorite target, hauling in seven catches for 102 yards and a score.  Chance Bell  paced the SDSU rushing attack with 63 yards on 18 carries.

SDSU's defense limited Utah State to one touchdown, a Jaylen Warren 11-yard run in the final minute of the first half.  Darren Hall led the Aztecs with nine total tackles.

The Aztecs have their first bye next weekend and then will play at Colorado State Oct. 5.